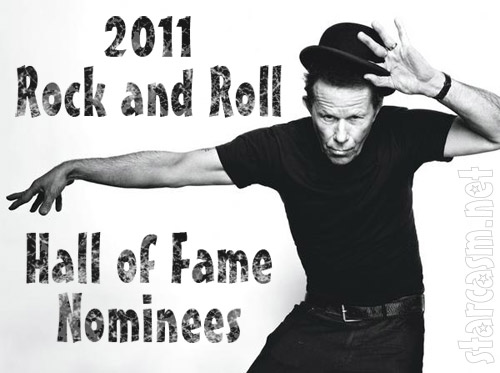 The 2011 nominees for induction into the Rock and Roll Hall of Fame have been released and once again it’s a diverse list of musicians spanning the genres of rock, R&B, disco, rap, pop, cajun and Tom Waits.

In order to be considered for induction your first album must have been released 25 years prior, so this batch all made their debut prior to 1985. (Before you get upset, remember that Traveling Wilburys Vol. 1 didn’t come out until 1988.) Some notable exceptions that did qualify but missed out on getting noms include: Kiss, Joan Jett, T. Rex and The Smiths. Getting left off the nominee list as well as my list of bands left off the nominee list is Rush.

On my personal list of notable snubs are Lonnie Donegan, Nick Drake, ELO and “country” legends Merle Haggard and Waylon Jennings, the latter of which recorded some of the toughest, badassest rock music in the history of the planet. (Put Honky Tonk Heroes in Thunderdome with any ABBA – R&RHoF inductee – album and I can guarantee which album walks out alive!)

Here is a YouTube sampling of all the artists on the threshold of Halldom, beginning with my favorite of the bunch, Tom Waits.

BON JOVI: “Wanted Dead Or Alive” from Slippery When Wet

DR. JOHN: “Such A Night” from The Last Waltz

NEIL DIAMOND: “Dry Your Eyes” from The Last Waltz

DONOVAN: “Annihilated By Bob Dylan” from Don’t Look Back

DARLENE LOVE: “All Alone On Christmas” from Home Alone 2 (with the E. Street Band)

LAURA NYRO: “Save The Country” from New York Tendaberry

JOE TEX: “Show Me” from Show Me

VIDEO Country star Billy Gilman also comes out: “It was time for me to be honest”