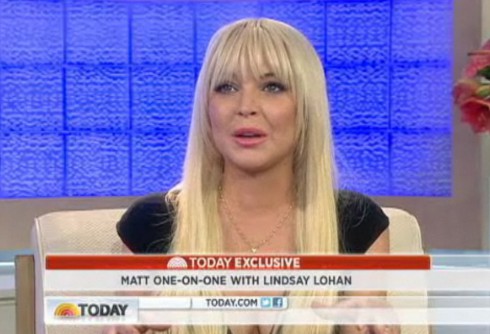 Everything’s been really quiet on the Lindsay Lohan front lately, except for kindlings of a restart of her acting career. The latest Lindsay headlines have been about her landing a role playing Elizabeth Taylor in a Lifetime movie (following in the footsteps of Rob Lowe is never a bad thing,) and also landing a gig hosting SNL this weekend.

Not only is she hosting SNL, but she’s reportedly ready to completely make fun of herself, something she’s criticized SNL for doing in the past. She even raised a stink when Gwyneth Paltrow uttered a joke about her on Glee. Laughing about yourself is a sign of maturity and growth, so hopefully Lindsay really is on the right track now.

She also sat down with Matt Lauer for an exclusive taped Today interview. She told Matt she’s been clean and sober for “a while,” and while she first bristled at the thought of feeling personally connected to what happened with Whitney Houston, calling it “scary” and “morbid” to compare her life to Whitney’s, eventually opened up a bit about what it was like to “fall into that world” of substance abuse.

Matt: And how long has that been?

LL: Um, it’s been a while. It’s been a long time. And it’s nice to feel that, I also have a lot of great people in my life that are in the same position, so I can always turn to them. And I’ve had great people that I can talk to at anytime, and that have helped me kind of figure myself out.

LL: I could, but that’s not my thing anymore. I went out, actually, a few months ago with a friend, and I was so uncomfortable. Not because I felt tempted, just because it was the same thing that it always was before, and it just wasn’t fun for me. I’ve become more of a homebody and I like that.

M: I also thought about you not long ago when Whitney Houston passed away. Someone with so much talent, such raw talent, and who went through such a tough time, and obviously the end came way too soon. When you heard the news of her death, did any of it register on a personal level with you?

LL: Not really. I wouldn’t like to, I don’t want to go there. That’s kind of a scary, morbid thing to discuss. Maybe to some extent when I went to jail, and being in that place, that was really terrifying for me.

M: And the abuse also, in terms of substance abuse. It can rob talent.

LL: Yeah, no, I completely agree. Yeah. And you can just completely kind of fall into that world, and that’s a really scary thing, and I have experienced things like that. And I have friends that have experienced things like that. And it’s a really sad factor that can come into play in people’s lives sometimes if you don’t recognize it, and a lot of people don’t like to. And I think I did that for a long time. I think I was scared, and I didn’t want to admit it to myself, let alone anyone else.

The rest of this interview with Matt Lauer airs tomorrow morning (Thursday) on The Today Show. What do you think, is Lindsay perched for a comeback? Has she cleaned up her life for good?

Lindsay Lohan Sued For Kidnapping Under The Influence