Lindsay Lohan has had her guest appearance on the show Ugly Betty cut back from six to four episodes, according to sources for E! and Page Six. There are conflicting reports, some blaming America Ferrera’s dislike of Lohan for the early dismissal, others blaming Lohan’s actions on and off the set. 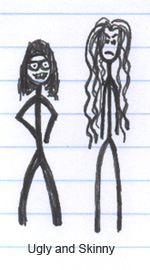 Lohan didn’t kidnap anybody or get behind the wheel while intoxicated, but there are accusations that she chain smoked, wouldn’t appear on set unless Ferrera was already there, and even went without panties while filming a scene that involved Betty pulling down her pants. When is it going to occur to television executives that the making of non-reality shows would make a great reality show?

In her defense, friends of Lohan report that she was wearing a g-string at the time of the incident, and that it took place during a rehearsal in which the pants weren’t supposed to be pulled off anyway. (I guess we know why Britney hasn’t appeared on Ugly Betty)

This sounds like another she said/she said incident that would best be settled in a cage cat fight on pay per view! Where’s Don King when we need him?!?