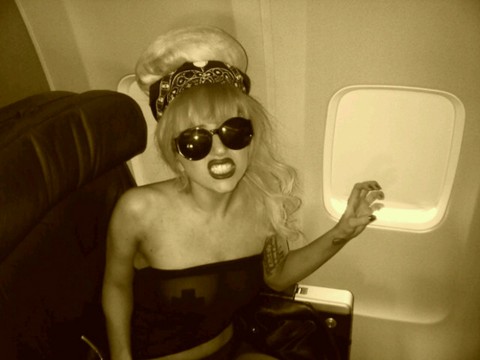 Over the weekend Lady Gaga tweeted an in-flight pic of her with an Amy Winehouse-style beehive.

In the past Gaga has expressed admiration for Winehouse and credited her with paving the way with her unique, retro-inspired signature style for Gaga to become the biggest mainstream pop star in the world while donning the most anti-mainstream outfits imaginable.

You gotta hand it to both Winehouse and Gaga for injecting a little life and creativity into mainstream and pop music.

“I will always have a very deep love for Amy Winehouse. Because of Amy, very strange girls like me go to prom with very good-looking guys. She’s a different kind of woman I don’t believe that what I do is very digestible, and somehow Amy was the flu for pop music. And everybody got a little bit of the flu and got over it, and fell in love with Amy Winehouse. And now, when more flu comes along, it’s not so unbearable.”

She does liken Amy (and herself) to a flu virus, but that’s kind of fitting too.

Lady Gaga to join V Magazine as columnist, needs you to illustrate her