It’s a sad day in the world of television as one of the funniest shows (animated or not) in the history of the media calls it quits. King of the Hill is currently in its 13th season with Fox and the network has decided not to renew the series next year. 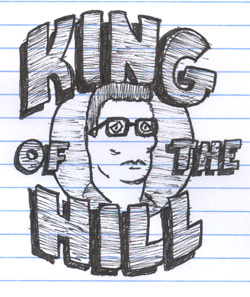 ****WARNING**** This post only has a couple very brief moments of snarktitude, the rest is just non-entertaining fawning over Greg Daniels and Mike Judge’s animated creation.

In addition to being funny, I believe KOTH often achieves the goal of art, which is to shed light on the reality of the human condition. The cast of characters could have easily been two dimensional (heh heh) but they are given depth beneath oft-times stereotypical veneers, or at least those living in the Hill household are. (Dale, Bill, Boomhauer, and others outside are more typical of comedy characters for comedy’s sake commonly found in sitcoms) Peggy, Luanne, Bobby and Hank teach me more about myself in 30 minutes than Will & Grace, Seinfeld, or 30 Rock could teach me in a lifetime – which isn’t to say Seinfeld and 30 Rock aren’t funny.

Another unique thing about King of the Hill is it often contains conservative wisdom, something usually regarded as an oxymoron in most popular entertainment. Hank Hill is not much for change and he’s surrounded by folks that are extremely succeptible to popular new trends and ways of thinking – an environment in which, more times than not, Hank’s conservative nature is everyone’s saving grace. And in those situations where he winds up looking like the typical out of touch backwoods old-schooler, Hank is able to grow. He fights it, but he is always willing to surrender to truth.

I suppose I could ramble on for hours about all the great qualities of this great show, but a sarcastic celebrity news site probably isn’t the ideal place to do that. Instead, I will pay tribue to the show in a way that I hope will grow into something larger – a tribute from all starcasm.net readers. What I propose is that people post up their favorite quotes from the show and as the number of quotes grow (whether it takes a couple weeks or a couple years) we will add character drawings and graphics to make it a fun public memorial. To get the ball rolling, here’s one of my favorites (I couldn’t pick just one):

Gone With The Wind It Like Beckham? David Beckham Plots Return To Europe