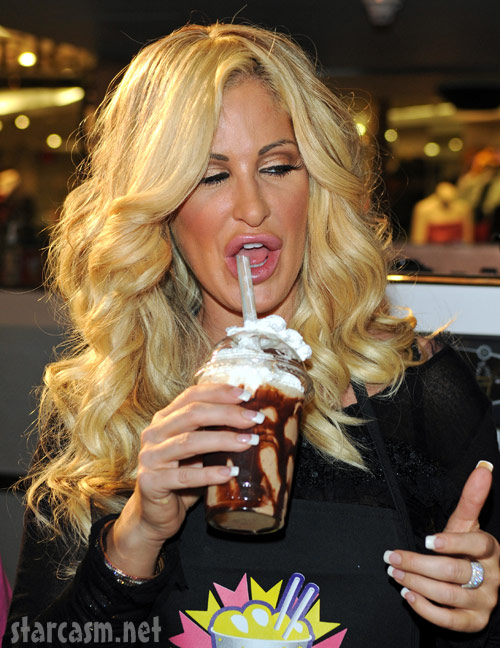 First comes buns, then comes a baby in a baby carriage, then comes marriage! Or something like that.

Real Housewives of Atlanta‘s wig-wearing female drag queen and chart-topping musician Kim Zolciak is reportedly engaged to her future baby daddy Kroy Biermann, who she first met at a dancing charity event in Atlanta after noticing his sexy backside on the dance floor.

A source told RadarOnline.com: “Kim and Kroy are engaged, and only a few people know about it.”

“They wanted to announce it in a national magazine, but Kim was so excited that she told a couple of close friends about it.”

Kroy, a defensive end for the Atlanta Falcons, reportedly bought her a “substantial ring” but Kim isn’t wearing it in public yet.

The source goes on to report that the two are in talks for their own spin-off reality show. WHUH?!? Kim is one of my all-time favorite housewives and paired with Nene Leakes makes for the most entertaining duo on Bravo, but I don’t think I could watch more than 10 minutes of Kim Getting Married? Let’s hope she stays with the peaches of the ATL and shows Phaedra how a REAL diva gives birth on television!

Kim officially announced last week that she is three months pregnant with Kroy’s child after denying the pregnancy rumors the night before on Andy Cohen’s Watch What Happens Live!

Phaedra Parks and Kenya Moore are feuding over Apollo Nida