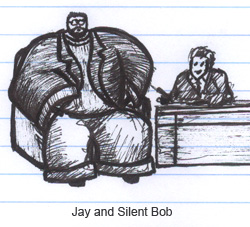 He was playing poker at a comic book store owned by a friend, when he excused himself to “drop the kids off at the pool.”  (What? Not a Magic the Gathering tournament? This dude is such a hardcore dork by choice, we almost find it hard to make fun of him. We won’t even mention the HUGE “Highlander” fan black trench coat. Oh wait, we just did.) Upon entering the comic book facilities, Kevin noticed that the toilet was one of those that juts out from the wall without a base. Given his his ass mass, he was rationally concerned about the physics involved in his endeavor so he remained elevated….

….Anyway, he sat down to wipe and the toilet broke right off the wall with poop precariously close to spilling out, forcing Kevin to leap for safety, or at least roll for safety. If you watch “Intervention” on A&E you know that this is what they call “rock bottom.” Kevin Smith has sworn to lose some weight, apparently realizing that looking like Orson Welles doesn’t necessarily make your movies any better. We wish you luck, Kevin. We know some cold circus elephants that could use that trench coat! (We have no desire to keep Michael Moore warm)