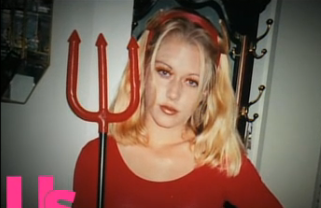 Kendra Wilkinson Baskett, E!’s darling child who’s best known for her signature laugh, bangin’ body, willingness to sell her life to television and tabloids and really her all around good naturedness, has an E! True Hollywood Story airing tonight at 10p.m.

That’s kind of a shocker, since Kendra doesn’t seem that troubled or wild despite her Playboy past. The most recent revelations that put a chink in Kendra’s rosy armor were when she admitted to OK! Magazine that she struggled with post-pardum depression after giving birth to 10-lb Hank Baskett IV, and  when she features struggling with losing baby weight on her E! show:

Kendra’s making a buck off of these confessions, and it heightens the drama of her show and brand, but it’s also kind of brave for her to put these things out there. 10% of women deal with the often horrifying symptoms of post-pardum depression after giving birth, and almost every woman deals with some degree of extra unwanted pounds.

Having a public figure talk openly about these experiences can help other women feel less alone, but at first Kendra was taking a step in the opposite direction when she was featured on the cover of OK! with a shockingly thin bikini body just two months after giving birth. This no doubt sent chills down the spines of most new and expectant mothers. Watching her show, also called Kendra, on E! however, shows that those OK! photos were somehow photoshopped and misleading, and she’s still struggling to lose those few extra pounds. Now, tonight she’ll discussing on E! True Hollywood Story other issues that people often experience: teenage depression, drug use, and rebellion.

US Weekly has a sneak peek video that reveals Kendra entered a mental hospital when she was 15 for a suicide attempt, she also cut herself, experimented heavily with drugs, and ran away to do blow nonstop with her boyfriend sophmore year:

Lamar Odom talks affairs with ‘b!tches and THOTs,’ cocaine addiction, and suffering a dozen strokes in eye-opening Us Weekly interview