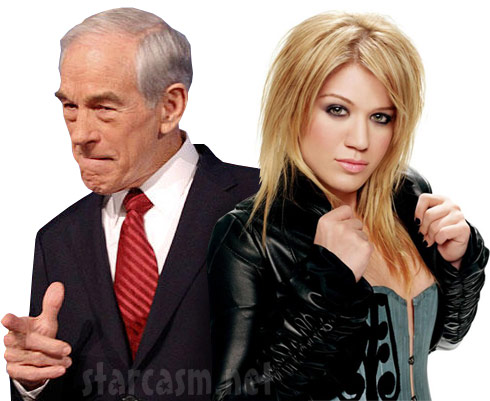 Pop singer Kelly Clarkson touched off a powder keg on Twitter last night after she tweeted her support for Republican Presidential hopeful and current US Congressman Ron Paul. As you might imagine, a number of Clarkson’s fans – many of which apparently still think she is gay despite her numerous denials – lashed out at her for her comment.

Kelly seemed taken aback by the hateful tweets as she started to responding to them individually. Here are all of Kelly’s tweets and the original tweets she was replying to (minus one that was protected) in the order that they were written from earliest to most recent. Kelly wrote a few lengthy responses, including a poem towards the end, that were continued on whosay. Those extended tweets are inserted in the timeline as text.

Clarkson’s initial tweet was one of the ones more than 140 characters, so here it is in text form, followed by the rest:

“I love Ron Paul. I liked him a lot during the last republican nomination and no one gave him a chance. If he wins the nomination for the Republican party in 2012 he’s got my vote. Too bad he probably won’t.” 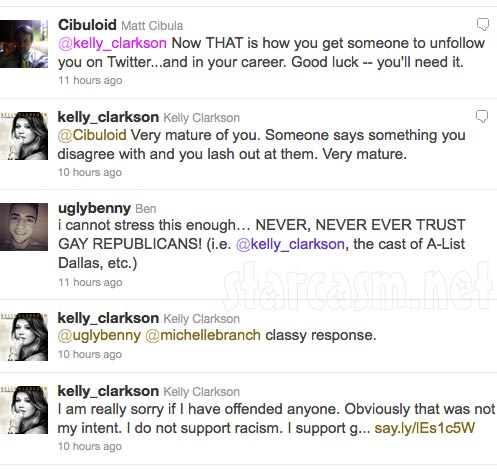 “I am really sorry if I have offended anyone. Obviously that was not my intent. I do not support racism. I support gay rights, straight rights, women’s rights, men’s rights, white/black/purple/orange rights. I like Ron Paul because he believes in less government and letting the people (all of us) make the decisions and mold our country. That is all. Out of all of the Republican nominees, he’s my favorite.”

“Man my eyes have been opened to so much hate tonight. If y’all ever disagree with something I say please don’t feel the need to attack me. I will listen to what you say and any articles or viewpoints you have when you say it with respect. Being hateful is not a healthy way to get people to see or hear you. I was raised to respect people and their decisions and beliefs and I hope you will grant me the same decency. If you don’t agree with me simply unfollow me. It’s really that easy. I hope you don’t because I would love the chance to hear what you have to say but if you’re so blinded by hate you can’t seek peace and progress then that is your unfortunate prerogative.” 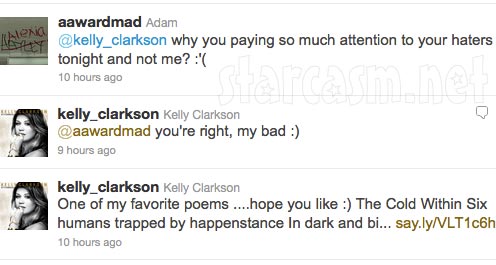 Six humans trapped by happenstance
In dark and bitter cold
Each possessed a stick of wood–
Or so the story’s told.

Their dying fire in need of logs,
But the first one held hers back,
For, of the faces around the fire,
She noticed one was black.

The next one looked cross the way
Saw one not of his church,
And could not bring himself to give
The fire his stick of birch.

The third one sat in tattered clothes
He gave his coat a hitch,
Why should his log be put to use
To warm the idle rich?

The rich man just sat back and thought
Of wealth he had in store,
And keeping all that he had earned
From the lazy, shiftless poor.

The black man’s face bespoke revenge
As the fire passed from his sight,
For he saw in his stick of wood
A chance to spite the white.

And the last man of this forlorn group
Did nought except for gain,
Giving just to those who gave
Was how he played the game,

Their sticks held tight in death’s stilled hands
Was proof enough of sin;
They did not die from cold without–
They died from cold within.

VIDEOS Preview of all Season 12 Dancing With the Stars contestants dancing!