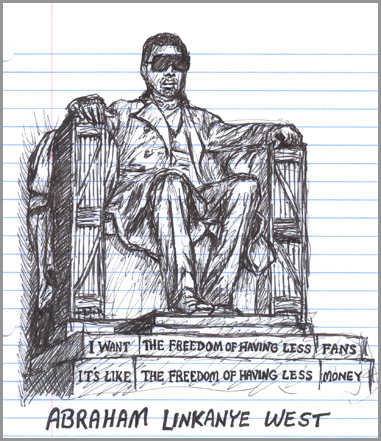 Don’t worry Mr. West – there are people like us in the trenches fighting for your freedom (and the freedom of other famous people) every day! (Nicole Kidman has managed to rescue an entire country from the crushing oppression of “down under” fans worldwide! And George Lucas is even running an underground railroad for diminished fandom in the guise of Star Wars and Indiana Jones sequels.)

You’re on the right track, Kanye. Stinking it up on Saturday Night Live and following that with nonsensical, drunk-on-your-own-ego interviews usually amounts to a great recipe for losing fans. We’ll plop another quote in here – maybe it will be enough to convert one more person:

It’s like Björk. If she wanted to pose naked, you’d be like, ‘Oh, that’s Björk.’ But if I wanted to pose naked, people would draw all type of things into it. I definitely feel like, in the next however many years, if I work out for two months, that I’ll pose naked. I break every rule and mentality of hip-hop, of black culture, of American culture.

(Enjoy cartoons poking fun at Kanye’s ego? Check out our previous Kanye post that tries to deal with his statement, “…I will go down as the voice of this generation, of this decade, I will be the loudest voice…”)

How many Kardashians are pregnant right now?