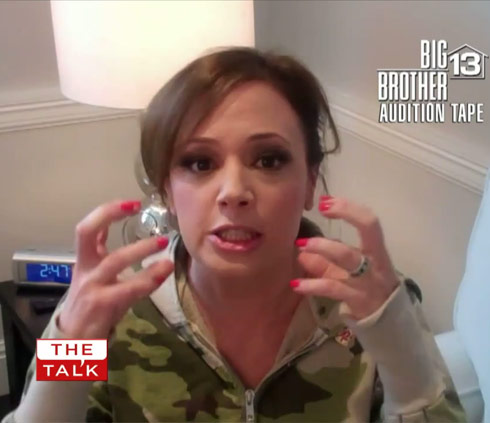 Big Brother host Julie Chen pulls double duty at CBS as she also acts as the host for the morning-side talk show The Talk.  I prefer my Chen dressed to the nines waiting for the latest devastated evicted BB contestant but that’s just my fandom showing.

Because of my favoritism I missed the following clip of Chen releasing some ‘surprising’ Big Brother Season 13 audition tapes as a primer for the upcoming season of the show.  Here’s the clip!

Those ladies from The Talk are just sooooo silly.  Kind of weak attempts at auditioning, I mean can you imagine how much Britney Haynes‘ {lurve<3) tape must have buried those reels!?!  Anyways, the actual in person auditions have been taking place throughout this great land of ours to weed out the next bunch of house rats ready to back stab and slop eat their way to a possible big win!

Just so you can get your priorities in order and your business straight Chen has confirmed that the Season 13 premiere of Big Brother will be Wednesday, July 6th!  Tick-tock, tick-tock, tick-tock…  To pass the time you can catch up on Brendon and Rachel who surprisingly are STILL an item!

Who are Stephen Colbert’s first guests on The Late Show?