Bravo’s hit reality show “Project Runway” was jumping ship to Lifetime for their sixth cycle, but Bravo parent NBC Universal has been granted a preliminary injunction that has temporarily held up the transition. 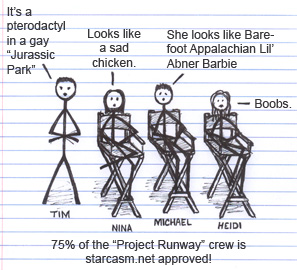 The legal bugaboo is whether or not The Weinstein Co., which owns “Project Runway,” should have given NBC the right of first refusal, which is in the contract.

If the lack of sarcasm in this story wasn’t indication enough, be sure to check out the cover story in next week’s People magazine, in which starcasm.net officially outs itself as a fan of “Project Runway.” Tim, Michael and Nina have a straightforward sarcastic style that is nothing short of “aesthetically pleasing.”

That being said, what is up with Kenley?!? She’s more defensive than Bill Clinton at an impeachment. How did she not get kicked off for that hip hop outfit? The only thing hip hop about it was the fact that the waist was higher than Snoop Dogg! There is a huge difference between hip hop and sock hop and that white as a lily silly rock-a-billy filly didn’t even come close to bridging the gap!

Poor Suede. He didn’t realize there is only one way to make a skinny flamboyantly gay black man look like rock and roll and it’s called “Little Richard.” (He used to be skinny anyway)

Kudos to Jerell, who shoulda won. He made us realize that the true magic of pop fashion is to make an annoying, whiney, immature human somehow look sexy, and that’s exactly what he did with Kenley. Amazing!