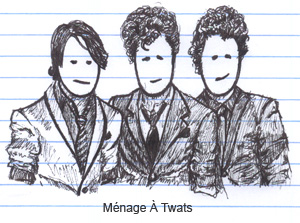 Great. A fourth hairy creature that likes to sniff butts and emit unpleasant things out of an orifice. (There has been no confirmation if Walter is fixed as well) These four sensory polluters will star alongside “Bonus Jonas,” little brother Frankie. BoJo hasn’t imposed himself on the public yet so we’re not sure if he’s annoying, talentless, or sexually active. The film should start draining the economy and the patience of parents sometime in 2009.

Butt don’t plan on enjoying too many Jonas filmless months, because prior to this $400-billion grossing stinker hitting the big screen, we’re going to have to hold our noses through a Jon-ass Brothers concert movie that recently finished shooting. Director Bruce Hendricks will attempt the Evil Knievel-esque stunt of taking one-dimensional performers and songs and leaping them over the second dimension, into a 3-D motion picture, cashing in on the success of Miley Cyrus’ hugely successful 3-D movie that came out in February. 3-D used to be a great vehicle for bad horror movies, and it seems that hasn’t changed.

Here’s a potential soundtrack for “Walter the Farting Dog:”