Parents of the world steel yourselves! A video snippet of the upcoming Jonas Brothers television show is making the rounds on the internet, and it doesn’t look good.

The show appears to have the same ol’ Disney ‘tween scenes:

But, according to descriptions of the show, “Jonas” also has the added unpleasantness of breaking into song at any moment. Oof! The world will soon be just a little bit worse than it was.

I suppose you can’t really blame Disney, though. After all, we do live in a capitalist society, and these pre-teen franchises inexplicably rake in hundreds of billions of dollars a year. Heck, if the federal government was serious about reviving our auto industry, they would lower the legal driving age to ten and Disney could build little pink and purple hybrid cars. Problem solved. (The highways would be just a tad less safe, but that’s a small price to pay for a strengthened economy!) Here’s a prototype Jonas Brothers car: 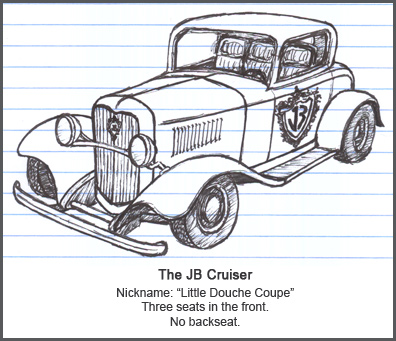 Some other potential pre-teen autos:

The Mamma Miata (or perhaps The Mamma Kia)
The Disney Madatgascar (Hybrid)
The Tracy Turnbladdilac (Comes with junk in the trunk)
The Hyundai School the Musical
The Tinker Bel Air
The Hannah Montana (SUV Party wagon. Holds up to 12 little girls)
The Miley Cyrustang
The Power Range Rover