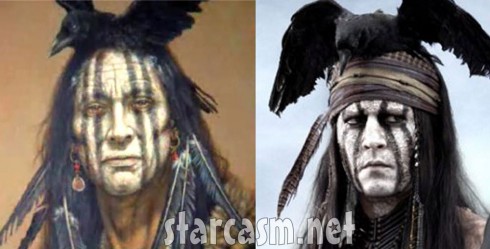 Johnny Depp’s look as Tonto in The Lone Ranger is pretty bizarre and it looks almost too much like his look in Pirates of the Carribean, but despite the striking stripes, and the dead crow on the top of his head, his look is historically accurate.

Depp’s look was inspired by a Chipewyan legend named: Crow-head!

Of course the image above isn’t the real Crow-head, but it is an artist’s rendition (“I am Crow” by Kirby Sattler) that may have been inspired by the story of Crow-head that existed well before Johnny Depp’s version of Tonto was a twinkle in anyone’s eyes.

Here’s the story of Crow-Head, simplified:

Crow-head was a Chipewyan dwarf, who as a young child, killed his father. When he grew up he became a medicine man, who a cape made of of crows, and took care of a young boy who wasn’t his, who he called his grandson. He was bullied by a couple of girls in the village who made fun of his crow-cape.

The Cree Indians showed up and slaughtered the Chipewyan people (except for Crow-head and his boy,) and instead of crying over them, he stacked their bodied together, and then let all the maggots and worms infesting their bodies infiltrate his, thus bringing all of them back to life except the girls who mocked them.

Later, some giants were approaching the village from the ice, and he went out to kill them because he was a bad-ass. He clawed at the giants with his hands, and killed them with his deer horn. After he killed them, he was still filled with rage, and began hammering away at the ice until he fell over dead. His heart was in his little finger, so when he hammered at the ice, he hurt his heart.

You can read a longer version here.

Moral to this story: Don’t hate on the weird guy wearing dead crows on his head, because he won’t bring you back to life with the rest of your village when you get slaughtered.

Depp spoke to Entertainment Weekly about Crow-Head inspiring his Tonto look. According to Johnny, the lines on the face represent the “separate sections of the individual.”

“I’d actually seen a painting by an artist named Kirby Sattler, and looked at the face of this warrior and thought: That’s it. The stripes down the face and across the eyes … it seemed to me like you could almost see the separate sections of the individual, if you know what I mean.

There’s this very wise quarter, a very tortured and hurt section, an angry and rageful section, and a very understanding and unique side. I saw these parts, almost like dissecting a brain, these slivers of the individual,” he said.”That makeup inspired me.”

Johnny Depp to star in Yoga Hosers with daughter Lily-Rose