John Daly (America’s full time southern overweight white male Amy Winehouse and part time professional golfer) is in the news again, this time getting hauled off by police after passing out at a Hooters restaurant near Winston Salem, North Carolina. 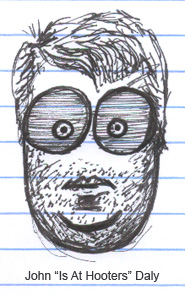 Our first Hooters story! We’re obligated to milk this one, so here goes:

Tit seems John had too much to drink and not enough teat and lost consciousness. Medical personnel arrived on the scene and probably had to areola him over before he came to, after which he refused to go to the hospital. (Thanks to his alcoholism jugstaposed with often feeling depressed and melonscholy, John has spent a lot of time in various kinds of hospitals.) Being too inebriated to drive himself, police uddered “tata” to the waitresses and placed John in custody for 24 hours. We will keep you abreast of the situation, but we’re guessing by the time John gets out it will all be a distant mammary.