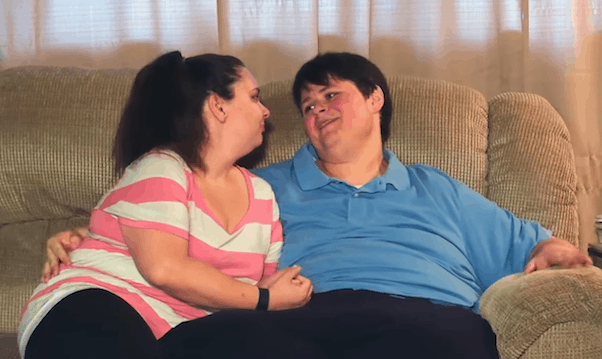 My 600 Lb Life star Joe Wexler has largely gone silent since news of his divorce from his now-ex-wife Sarah became public. But that hasn’t stopped Sarah from offering a couple of updates on Joe Wexler now — including addressing the biggest and longest-standing rumor about Joe. In recent posts, Sarah also continued to present her side of the story of her and Joe’s split, and insists she wishes her former lover well.

How is Joe Wexler now, after his divorce from Sarah?

Joe seems pretty dejected in the wake of the divorce, although he did reveal he’s found a new love. Joe also purchased a new home near his family. But his ex-wife Sarah has a version of the divorce that differs greatly from Joe’s.

Starcasm broke the news of Joe and Sarah’s divorce in late October. Joe broke what had been a months-long social media silence with news of the separation, which at the time was still pending. Joe was also somewhat sparse with details, saying only that Sarah “made some poor choices and decided she needed to step outside of our marriage vows.”

After the divorce had been finalized, however, Joe offered a fuller version of events from his perspective. He confirmed that Sarah had “decided to have an affair,” one that Joe claimed sent him spiraling into a depression and returning to bad eating habits:

[The affair] took a heavy toll on me and slipped me into a depression for a while that made me revert back to some bad habits. I did gain as a result of it. What’s worse is the affair was so bad, that while my best friend was helping me move out of my house so I could come back to TN, she moved her new boyfriend in with a new bed and everything. What’s worse is she says it was a mistake and wishes she could take it all back, but yet she is living with the dude and still sleeping with him. Yes, I am bitter at it but only because I gave my all to it and I was loyal to her, but it wasn’t enough.

Joe added that he had moved back to Tennessee to be near his mother, and had just closed on a house.

However, we also got a very different version of events from Sarah herself. According to her, many of the things that Joe said — for example, that his weight gain came from divorce-related depression — were only half-truths. Most notably, Sarah told us that Joe had been emotionally distant and manipulative for around a year before she had an affair — something that Sarah did not deny.

“Joe threatened me for a year to divorce me anytime we had a disagreement,” Sarah told us. “He pushed me away for about 6 months to a year as well.” Sarah added that she “told Joe I would stop speaking to [her lover], go seek counseling and even get rid of my phone to fix our marriage,” but Joe had stopped listening.

The low point for both Sarah and Joe Wexler now appeared to be one night not long after Sarah made the offer above, when Sarah says she suffered physical abuse from Joe. Sarah told us that Joe “pushed me down in the bathtub with his body and caused PTSD trying to grab my phone to see who I was talking to.” Sarah spent the night in a hotel room; not long after, Joe filed for divorce.

What has Sarah Wexler said about Joe since their divorce?

Sarah hasn’t been mean about her split from Joe. In fact, in discussing Joe Wexler now, Sarah said publicly that she “only wants the best” for her ex-husband. And she’s answered one question about Joe that viewers have asked for years.

Other than his two statements paraphrased above and one response to a fan in which he said that Sarah “has to answer for her broken marriage vows,” Joe hasn’t made any pubic statements about his divorce. Sarah, on the other hand, reiterated that she and Joe apparently agreed they wouldn’t make any public statements at all about the split. It seems that Joe being the one to break the silence — and to not give what Sarah considers the full story — was the sole motivator for Sarah to share her tale.

Here’s what Sarah had to say about Joe and their divorce, a few days after our most recent update:

I would never have posted about my divorce as it was supposed to be private however Joe went against his word AGAIN and wanted my side explained. There were lies and discrepancies. He didnt gain weight due to me he had an infection after his last surgery with Dr Now. His leg was filleted open and he was on bed rest for like 6 months. He lost his self esteem after that. I only want the best for him.

As for that one long-asked question, it’s about whether or not the rumors of Joe Wexler transgender are true. While it’s a sensitive topic to say the least (and some would definitely say it’s simply insensitive), gossip about Joe actually being a transgender woman has followed him since his My 600 Lb Life debut nearly five years ago.

On that note, than, here’s how the fan who asked it of Sarah put it: “Can you just tell for those of us wondering if [Joe] was born a man or trans?” The woman added, “My daughter is trans so I am not being mean.”

Sarah’s response? “Joe is a guy!! Not that it’s important.”

If you need to catch up on the filmed portion of Joe’s weight loss journey, his three My 600 Lb Life episodes are all available for streaming. You’ll find his 2015 debut episode, 2016 Where Are They Now? episode, and 2017 follow-up on the show’s official site.