Jessica Simpson’s comedy “Major Movie Star” is so bad that it is only showing in non-English speaking countries. The show opened in Russia on October 9 and was the number one grossing movie for the week. (What was its competition? Perhaps a documentary based on recent Russian military actions called “The Medvedevil Went Down To Georgia?”) “Major Movie Star” is scheduled to open in Bulgaria in November according to Fox News.

The plot of the movie is that a successful Hollywood actress (J Simpy) loses her money and then has an epiphany that joining the army would be a good idea. Ohhhh man! There is an aesthetic theory that claims things can be so bad that they’re good (for example: William Shatner records, Melrose Place, kung-fu movies, Krystal/White Castle burgers), and we have to admit this sounds like a prime candidate! The Starcasm Netflix account already has a spot in it’s queue set aside!

As a snarky celebrity gossip site, it’s exciting to think that we might have the female version of David Hasselhoff on our hands! (We are willing to admit that Jessica Simpson might be fun to watch if you couldn’t understand what she was saying) Perhaps her success will lead to more Russian movies like: 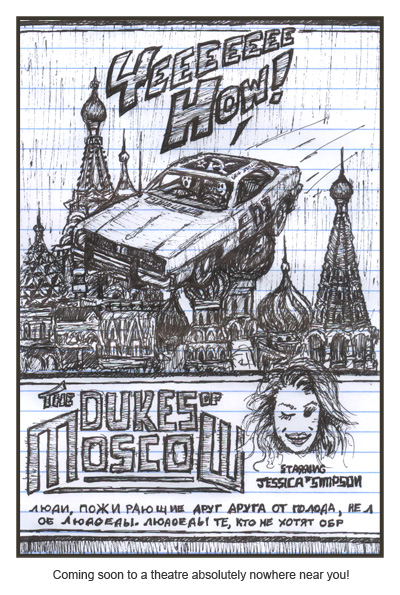 If so, more queue slots shall be reserved!

(If the movie poster looks familiar, we apologize. It seems the marketing firm that handled “Thelma & Lohan” is the same as “The Dukes of Moscow”)

****UPDATE 10/31/08 – It’s official. “Major Movie Star” will not make it into American theaters and will go straight to dvd. That was expected. What wasn’t expected is that they’ve changed the title! (We assume for marketing purposes) OK folks, this is no joke. Are you ready? Drum roll…………….. “Private Valentine: Blonde and Dangerous.” I guess they wanted it to sound like it at least has nudity. Poor Jess is learning that old adage the hard way: Those who can’t do, look pretty and record music.