I’m not sure which has attracted more attention from Jessica Simpson’s recent performance at a chili cook-off, her apparent weight gain or her Peg Bundy inspired, ridiculously high-waisted mom jeans and animal print double belt. A number of celebrities have come out in support of Jessica’s fashion choices and her fuller figure, including Kim Kardashian, sister Ashlee and pudge activist Heidi Klum, who took a break from filming Germany’s Next Top Model to tell People magazine, “I think everyone should be the way they feel comfortable.”

Ironically, Jessica Simpson is currently being sued by SpeedFit over a fitness video she appeared in back in 2004. Jessica and her father refused to allow the release of the video after a dispute arose over whether or not Jessica’s trainer (also represented by Jessica’s father) could appear in it as well. Jessica received $1 million for the gig and because of her contract was allowed to prevent the release and still keep her money. I found a clip advertising the workout video, but there’s no way to embed it in the post. (It seems Simpson’s peeps are very diligent about keeping it off youtube and other similar sites) So, you will have to click here to see it – which I highly, highly, highly recommend. (I can’t guarantee ol Papa Joe won’t find this one as well, so watch it sooner rather than later or you may not get another chance!)

Did you watch it?!? Were you prepared for that zen moment that allows us all to experience the world as Jessica experiences it?

“Do you ever see horses doing a marathon?” 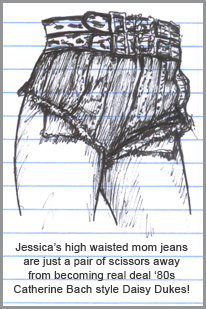 I felt exactly like Jessica looked! (Which is probably similar to how she looks when asked, “Do you want fries with that?” or “What year is it?”) My brain was completely gridlocked in metaphysical confusion! “No. Yes? I dunno!!!! (nervously) Ahahahahaha!!” And the spokesperson is the best! He’s a wonderful example of someone who has learned to speak English by watching late night infomercials:

“And I want you to really smile because really this is going to change the country!”

J Simpy looks great and seems to be acting as well as she does in her movies, so maybe they could compromise and release this in Russia? They need to resolve it somehow because, as SpeedFit owner Alex Astilean said about Jessica and her father in the New York Post, “They are hurting millions of fat people in America.”

Click the thumbnail to see more images of Jessica’s performance at the chili cook-off over at The Superficial. (Photos: Splash News)