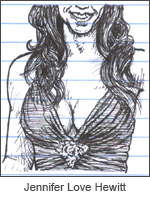 Oh the magnificent career-crippling power of Delgo! After appearing in the theatrical hydrogen bomb, Jennifer Love Hewitt has chosen to “star” in Ghost Whisperer in a desperate attempt to somehow communicate with her deceased acting career. Alas, the ploy doesn’t seem to be working and Jennifer continues to sink further into irrelevancy by not only dating fellow GW cast member Jamie Kennedy, but also making and selling t-shirts for his stand-up comedy shows. Brutal!

Jamie Kennedy tells People (yes – this is how Jennifer Love Hewitt gets in People nowadays) “She took my shirts and bedazzled them,” Kennedy says. “She would take regular shirts and put sparkles on them, and we actually sold out of them – people go nuts for them.”

I was willing to concede the possibility she could afford a Bedazzler, but there’s no way she has the capital to be buying t-shirts in bulk! So I had one of our starcasm investigators attend a Jamie Kennedy show this evening and buy one of these cornified masterpieces. Mystery solved. 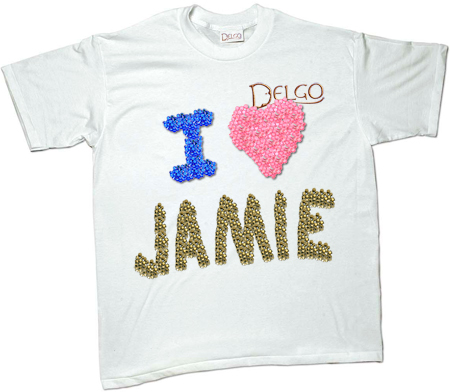 I applaud the marketing alchemy of J-Lohew. She might not have converted lead into gold per se, but she has at least made lead into “sparkly and sellable.”