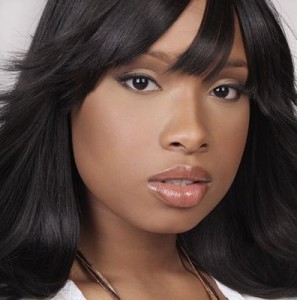 A very pregnant looking Jennifer Hudson sang “Will You Be There? (Hold Me)” at Michael Jackson’s memorial service. The young singer was dressing in a beautiful, willowy white gown and looked amazing as she belted out the tune. Michael’s backup dancers danced behind her and formed a circle around her towards the end of the song.

There have been rumors that Hudson is pregnant for months, and at the close of her performance she briefly rested her hands on what looked like a very pregnant belly.  There were also photographs of Usher touching her bump backstage.

Hudson herself has yet to confirm that she is, in fact, expecting a baby with boyfriend/fiancé David Otunga, though “sources” told Essence Magazine in April 2009 that Jennifer was indeed pregnant.

According to People, Otunga proposed to Hudson on her birthday last fall. Ortunga is know for his participation in the reality show I Love New York 2 where he went by “Punk” and lasted until week 10.

She returned to the stage during Super Bowl, where she sang the national anthem, and has been on tour this year as well. It’s wonderful that she’s continuing to share her gift with  millions of people after enduring such a horrific family tragedy.

Her contribution to Michael Jackson’s memorial service was beautiful, and hopefully she’ll continue to share her talent as she finds happiness and stability with her new family.

Below is a clip of Jennifer singing “Will You Be There? (Hold Me)” yesterday at the service:

After such a chaotic year, it’s understandable that Jennifer would like to keep her personal life private, but a pregnancy in the public eye is difficult to cover up. What do you think? Should Jennifer continue to keep quiet about her new coming new baby, or should she open up a bit to the media?