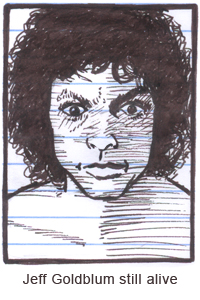 Soon after news had spread that Michael Jackson was in the hospital, a rumor started that actor Jeff Goldblum had fallen off a cliff and died while filming in New Zealand. The rumor was later refuted by representatives for Jeff, who assured everyone that Mr. Goldblum is alive and well in Los Angeles. A lot of folks have speculated about what sparked the rumor, and there’s even evidence that it actually started back in 2006. But, starcasm has a reliable source inside the Institute of Relevancy that tells us something different. Jeff Goldblum didn’t perish after plummeting from a cliff, his movie career did. Reports say there were numerous attempts to revive it, but after a screening of the upcoming Aniston/Goldblum motion picture The Baster, it was officially pronounced dead by Institute officials.

I’ve always imagined Spielberg to be like the Christopher Walken character in the Blue Öyster Cult SNL skit, “Guess what?! I’ve got a fever, and the only prescription… is more Goldblum!” He was the wizard of the directorial kitchen, not only serving up a masterful dish of suspense with a bunch of robotic lizards, but instead of the usual Goldblumian two cups quirkiness, two cups pessimistic irony and two tablespoons of diarrhea mouth, Spielberg was able to serve up three cups quirkiness, three cups pessimistic irony and three tablespoons of diarrhea mouth! Now that’s directing! (To Jeff Goldblum’s credit, this recipe wouldn’t work if he weren’t likable in the first place. See: Michael Moore)

In memory of Jeff’s movie career, I offer his first role in a major motion picture, which also happens to be my favorite “Holy crap! That’s Jeff Goldblum!” moment of all time. Here’ Jeff Goldblum as a grocery store disrespectin’ hoodlum Jeff Goldblum in Charles Bronson’s Deathwish: