After what seems like years, Ashlee Simpson-Wentz gave birth to a 7 lbs., 11 oz. baby boy on Thursday. Ashlee and moon-faced husband Pete Wentz named the child Bronx Mowgli Wentz after the Disney character from Jungle Book, which falls right in line with their Alice In Wonderland wedding and Winnie the Pooh baby shower. (You would think with recent historical events they could have at least named the boy Baronx.) 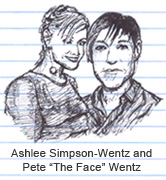 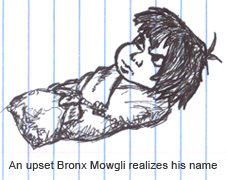 There was a moment of amazement in the delivery room when the newborn uttered his first word, “momma” just minutes after being born, but doctors later discovered Ashlee had pre-recorded the vocals.

Young BMW and both parents are said to be doing fine, and if Ashlee is fine then we must assume young Mowgli didn’t inherit his father’s face. (Click here for a photo) Look at that! That’s the only person I’ve ever seen try to do a comb-over on his face! His face is soooooo big! “How big is it?” you ask?

His face is so big…
While on tour in Canada he was going to get a facial tattoo but couldn’t because they don’t allow billboards.
He has one cell phone for his left ear and one for the right because of the different area codes.
His passport photo is a centerfold.
His electric shaver is a John Deere.
You need a Tom Tom to kiss him on the cheek.
He’s got a new CBS political news show called “Nation the Face.”
The US mint was going to put him on a coin, but it would have required the quarter AND the nickel.
If he were an animal he would be a platter puss.
He has to put his t-shirts on upside down. (That only makes sense if you don’t think about it)
Smiling from ear to ear requires a time zone change.
Google is launching the world’s largest social networking site and they’re naming it Petewentzbook.