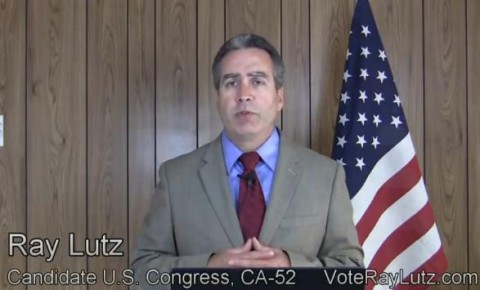 Democratic congressional candidate Ray Lutz from California is literally starving to debate Republican representative Duncan Hunter.  In a story from the darker (back)side of politics Mr. Ray Lutz has decided to go on a hunger strike in order to force his opponent to debate him.  Adding to this craziness is libertarian candidate Mike Benoit who is doing the same thing.

The starving for attention campaign began on sundown August 12th and the two up to this point have stuck to their starvin’ guns.  For Lutz things are getting pretty dire as he has lost 14 pound and was forced to take an enema to avoid toxic shock.  Hopefully Hunter will bend and rectumfy this derrirare situation before Lutz goes Nutz.  Alass, Hunter is standing his ground and letting the two make (and insert things into their) asses of themselves.

“My hope is that he holds out and doesn’t expire before October because that’s when we’re going to debate him, and we’ve told him that several times,” said Dave Gilliard, a spokesman for Hunter.

The heart is a lonely hunter and it looks like this could go on for a long time.  So what will become of Lutz and the subsequent treatment to his butt?  Well he wants to tush-push the issue but he isn’t ready to die(arreah) for the cause.

“I don’t want to die – going to a debate with Duncan Hunter is not important enough for me to die.”

He may not beat the heavily favored Republican representative but perhaps Lutz’s story will one day become c(enema) and the tail of his bravery in the face of hunger and tushy showers will live on in the anals of political insanity.

Here is a video of the man with the plan to back door his way deep into the bowels of congress:

We salute you Ray Lutz, a true American with a plan to clean out America from all the filth and crap congested in its insides!