****UPDATE 6/19/09**** I found a way to provide full episodes for online viewing! That, combined with the fact that this post is getting ridiculously long, was cause for a brand new I’m A Celebrity post! Click here for a complete write up of last night’s show and to keep up with eliminations during the final week. Also, you can watch complete episodes a day after they air!

****UPDATE 6/18/09**** I took a couple days off because no one was getting voted off. That changed tonight, as the television audience voted both Holly Montag and Janice Dickinson off the show. I’m working on a new post where I’m hoping to embed videos of the full episode and I’ll go a little more into the details then. So check back!

****UPDATE 6/15/09**** Well, no one got voted off during the two hour Monday night episode, and the immunity challenge got rained out. So what did happen? Janice Dickinson revealed she hadn’t pooped for seven days and even showed the camera her enlarged abdomen in addition to her new dance, the constipation waddle. She spent the night in the doctor’s office and must have given birth to an eight-pound baby doody because when she returned to camp she was downright chipper. John Salley threatened to leave, then reconsidered and was elected Lou Diamond Phillips’ replacement as camp leader. Everyone revealed who their best friend in camp is, except Janice, who instead announced she needed to take a dump and then she left.

I received a comment asking what movie Lou Diamond Phillips and Stephen Baldwin were in together, but after exhaustive research matching up hundreds of B-movies on IMDB, I’ve concluded it either never happened or the CIA has erased all records of it. (My favorite movie title from my search? Stephen Baldwin’s Sharks in Venice

. Oh my gondola! Sadly, he was just a tad early to cash in on the campy bad shark movie market capitalized on by Deborah Gibson in the instant cult classic Mega Shark vs. Giant Octopus

from earlier this year.) Tune in tomorrow for another elimination, unless it gets rained out. (I think I’m actually going to do a separate post about Sharks in Venice – I’ll put in a link here when I’m done.) And here’s the link to the post! You have to check out the trailer!

****UPDATE 6/11/09**** I didn’t watch the full episode tonight, and I’m disappointed that I missed the Rod Blago appearance. I did tune in just in time to find out that America voted Daniel Baldwin off the island. In other “I’m a Celebrity” news, TMZ is reporting that Carrie Prejean was offered a nice stash of cash to go on the island, but turned it down. We’re talkin’ $70,000 for 1 week of work, and they were willing to double it to $140,000 if she stayed for 3 weeks.

****UPDATE 6/8/09**** Grrrrrrrrr! I just spent two hours watching this show and not only did they not really go into the Heidi and Spencer torture controversy, but once again no one got eliminated! They sort of glossed over the Speidi thing – though they did reveal Heidi had long since survived her night in the lost shack when she eventually had to go to the hospital. There was no elimination because the other half of Frangela quit. I forget – which one was eliminated before? Anyway – they’re both gone now. (See chart below) But, determined to not make rational mathematical sense, the producers revealed that during next week’s episode Heidi’s sister Holly Montag will be joining the cast. What?!?! These people have been suffering in the jungle for over a week (minus the other late addition Stephen Bladwin) and now Holly gets to walk in and compete for the prize on “equal” footing? And are they going to change the name of the show to I’m On The Hills Get Me Out Of Here?

****UPDATE 6/6/09**** There’s no sense in creating a new post every time someone is eliminated or quits or comes back to this show, so I’ll just continue to update this post with the most recent happenings from I’m A Celebrity Get Me Out Of Here!

The show finally got around to eliminating someone! Through some sort of bassakwards process where contestants and viewers reveal who they DON’T want eliminated, the person that people least want to not leave has to leave. Huh?

Well, however it is that Costa Rican inverse calculus works, the celebrity that was lucky enough to have to exit the jungle and this show was the Angela half of Frangela. My theory is that the public was outraged over the duo misrepresenting themselves. Sure, the others on the island are d-list celebrities, but they are essentially who they claim to be – John Salley is a former NBA player, the Baldwin brothers are Baldwin brothers, Janice Dickinson used to look really good, Patti Blagojevich is married to Rod, Heidi and Spencer are fame-mongering exaggerationalists from a fake reality show, Torrie Wilson is a former professional wrestler, Lou Diamond Phillips is an actor that played La Bamba and Sanjaya Malakar is a former contestant on American Idol. In stark contrast, there is no way in the world these Frangela women are comedians. It has to be a lie. And the people responded! So take heed Frances Callier! You better get funny or you’re gonna be joining your lesser half Monday night! (The revised contestant chart is below)

Oh – and the cast will be voting Monday whether or not to let Spencer and Heidi back on the show. Their initial vote was 8-2 against, but I’m guessing they had a stern talking to from the producers of the show that explained the effect on ratings that Speidi would have and now the camp is split 50/50. There will probably be some feel-good mumbo jumbo about forgiveness and second chances and then Heidi and Spence will be voted back in with certain guidelines they have to live by, blah, blah. Unless the guidelines are that Spencer has to stay in an opaque soundproof booth and Heidi must remain quiet and only wear bikinis, this has to be seen as a sellout.

I used to be completely confused as to how this show works and now it’s worse. Weren’t there supposed to be celebrities eliminated? Instead, they’re adding celebrities? What?

In case you missed it, the end result of tonight’s episode was the addition of another Baldwin even more obscure than Stephen as well as the potential return of Spencer and Heidi Pratt. 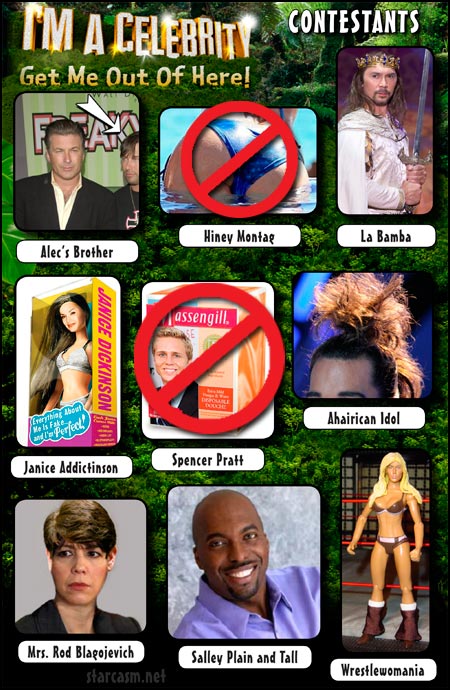 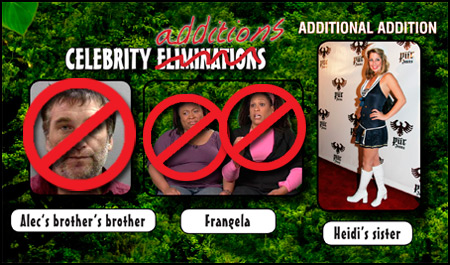 Daniel Baldwin was introduced as a surprise addition (supposedly there to replace the departed Speidi duo) resulting in a deflated, nervous and no longer effusive younger brother Stephen. Then the hosts interviewed Heidi and Spencer and they expressed their wish to return to the show, explaining that they were temporarily insane or some nonsense like that. They were told that if they spent the night in the haunted shack thing then they could return if the remaining celebrities wanted them back. (This is ridiculous)

The hosts then went to the other “celebrities,” which now included the additional Baldwin, and asked if they would allow The Hills couple to return if they successfully stayed the night in the haunted shack thing. Two of the ten people said yes, the others said no. I’m sure the producers will convince them otherwise by tomorrow evening’s show so that the only entertaining aspect of the show so far – albeit damned annoying – can return.

Let me get this right. Here’s an elimination-based reality show that essentially started off with nine announced celebrities and now that number has dwindled to … twelve? Are we to assume that by the end of the season the island will be filled with close to thirty almost famous people and their siblings? I’m a fan of decent television, get me out of here!

Lou Diamond Phillips Declared Winner Of I’m A Celebrity Get Me Out Of Here!