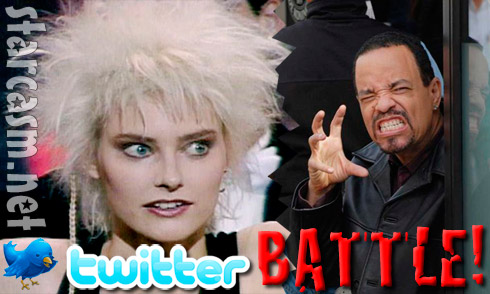 Singer Aimee Mann got a startling reminder Thursday that you have to be careful what you tweet because the entire world is listening! (Reading?)

Aimee, the former lead singer of ‘Til Tuesday and wife of Sean’s brother Michael Penn, tossed up this seemingly innocent and snarky comment about the acting prowess of rapper/actor Ice T about 2AM Thursday morning:

Someway somehow the observation made it to the leader of the Final Level Twitter Gang and a tall glass of unsweetened Ice T responded at 11AM with one of the most hilarious (and NSFW) tweetaliations ever! 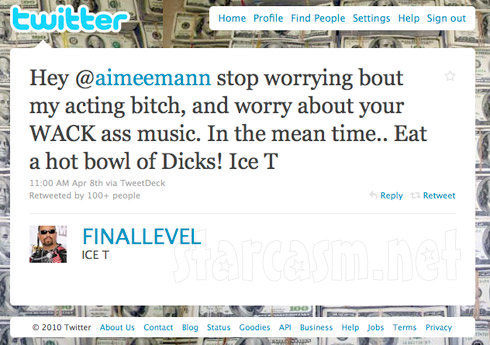 Seemingly unaware that she had riled up the Final Level Twitter Gang hornets’ nest, Aimee blissfully posted the effect of Simon and Garfunkel on her tear ducts:

Ice T must have gotten some responses to his tweet which he defended by saying:

Somehow Aimee found out Ice T had responded to her earlier criticism and the singer was obviously frightened. She expressed her fear publicly with a rapid-fire tweetfest that lapsed into outright apologizing by the end:

(For those not familiar with twitter, these read chronologically from the bottom up.) 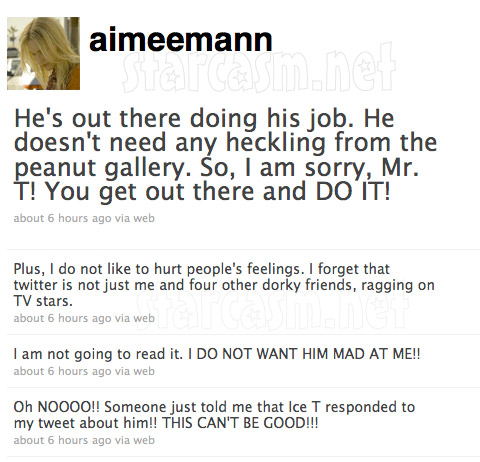 Ice T is not one for fighting when fighting is no longer necessary and he responded to the seemingly sincere apology:

But, just in case other people think they might have a little fun at Ice T’s expense, he twitterated his earlier point:

A third party to the entire event decided he would try to get in on the fracas when some dude named Chad Taylor fired off this barb:

Ice T retweeted the comment to which Chad responded: 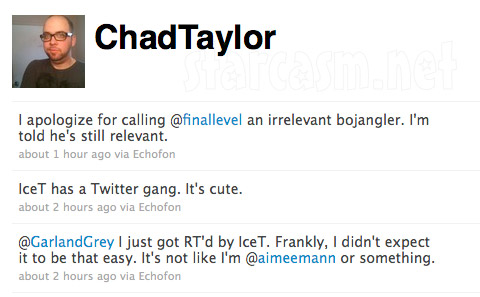 So what’s the moral of this story? In the slightly altered words of ‘Til Tuesday:

Hush, hush,
Keep it down, down
Tweets carry!

Don’t know what the heck I’m talking about? Here’s some ’80s glory in the form of Aimee Mann and ‘Til Tuesday’s “WACK a$$ music:”