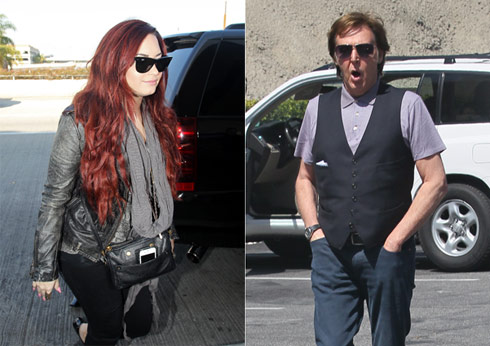 Sir Paul McCartney is a living legend who almost wasn’t among the living anymore after a near run in with pop star Demi Lovato!

According to Demi she almost ran over Paul yesterday (when all her troubles seemed so far away) while pulling in to a parking space. Just like any star struck young person who almost squishes a Beatle, Demi took to her Twitter account to share the story. She tweeted:

“So…. today I was pulling into a parking space that some guys were standing in the middle of, and almost hit them….. When one of the guys turned around…. it was a BEATLE…….. Yes, YOU HEARD ME…. SIR PAUL McCARTNEY!!! He was so sweet!! Can’t believe I met him today.. WOW! And…. I can’t believe I almost ran over a Beatle.”

It’s cool to hear that Paul was able to live and let die but I bet he wished he had some wings. In the least I’m guessing that he and his parking lot pals were almost a band on the run.

One other thought, these celeb types really do run in different circles when you’re parking your car and you randomly run in to freakin’ Paul McCartney.

Props to Allie is Wired for this near death experience scoop.