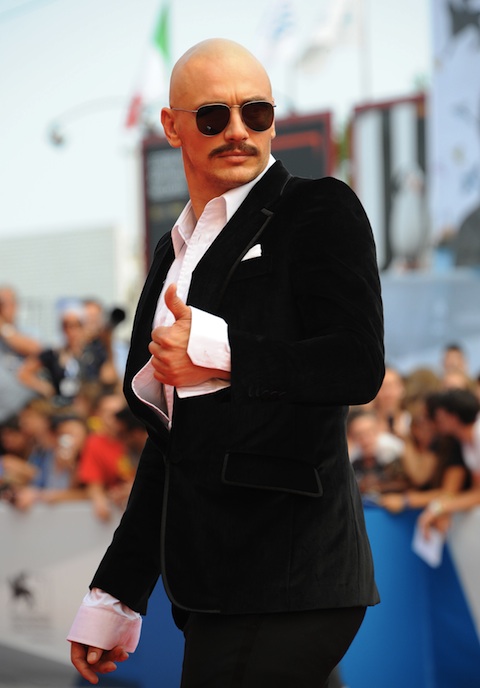 James Franco, bald as a freshly-plucked eagle and velvet-suited as a 70s high roller, took the Venice Film Festival by storm when he showed up on the red carpet.

Why was he bald and decked out like a latter day drug kingpin? For several increasingly strange reasons.

First, Franco was on hand to debut his newest film, an adaptation of William Faulkner’s 1929 classic The Sound and the Fury.

Second, he was there to accept the Festival’s 2014 Glory To The Filmmaker Prize, given to the moviemaker responsible for the most marvelous creation(s) of the past calendar year.

And third, he was there to show off a skull tattoo, part of Franco’s newest role, for which he actually shot scenes while on the red carpet at the film festival.

Entitled Zeroville, the movie is about a man “so enamored with movies that they become religion to him.”

Based on the Steve Erickson novel of the same name, Zeroville features scenes set at the Venice Film Festival. 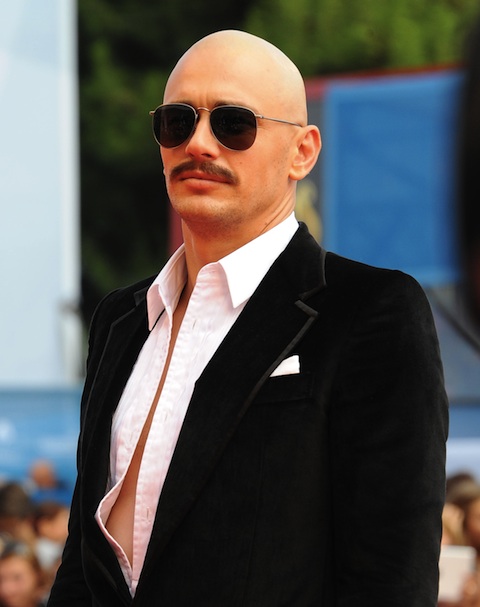 Except, it’s the 1977 version of the festival. Which is why Franco is sporting a glorious 70s mustache, and also why he’s wearing a suit of crushed velvet.

Franco also live-blogged The Baldening just a few days ago, posting a series of images of his haircut to his Instagram account.

What do you think of this bald mutha’s new look? Will it last?