Heidi Pratt was recently released from a hospital in Costa Rica stemming from what we’re told is a gastric ulcer. She was in the country with her husband (and The Hills co-star) Spencer Pratt filming the reality show I’m A Celebrity Get Me Out of Here. Spencer is claiming the couple was tortured and deprived of food and water for three days and that he plans on suing NBC. All of this after the notorious fame-mongering couple had quit the show twice during the first few days of shooting.

Leave it to Heidi Montag (Pratt) and Spencer Pratt to milk a novel’s worth of drama from one week on (and off) a pathetically unentertaining reality show. I think the only ones on the planet putting forth the effort to keep up with all of Speidi’s recent nonsense stemming from their I’m A Celebrity appearance/disappearance are the diligent folks over at TMZ. So, I’ll use their headlines to structure a timeline:

May 30th 2009 11:45AM – I’m A Celibate Celebrity
The cast has been announced and rules for the show are leaked to the Daily News, which includes a ban on drug use, racism, bullying and sex. This is the first indication I’m A Celebrity might actually benefit the world in some way by preventing Speidi (and the other contestants) from procreating – at least for a little while.

Jun 1st 2009 1:55AM – Heidi & Spencer Threaten to Head for ‘The Hills’
Reports from the set indicate Heidi and Spencer have already quit the show twice after only two days of filming.

Jun 2nd 2009 6:00AM – Speidi — ‘I’m a Celebrity …’ Is One Crappy Gig
A video clip montage from the show where Spencer is on a cell phone telling NBC executive Bill Silverman “This cast is devaluing our fame right now…I’m supposed to be cleaning up John Salley’s s*** in a bucket?” as well as his spat with Frangela and the consumption of a rat tail.

Jun 2nd 2009 12:37PM – Spencer Pratt — I’m No Damn Reality Star!
A source on the set tells TMZ that Spencer told producers of the show, “If you give me a script, I’ll do what you want. I’m not a reality star. I’m on The Hills.” This was allegedly said just before quitting.

Jun 2nd 2009 4:54PM – Audrina — Too Good for Speidi’s Sloppy Seconds
Rumors begin to circulate that I’m A Celebrity Get Me Out Of Here will replace Heidi and Spencer with another cast member from The Hills. TMZ contacted Audrina Partridge’s manager and got the following response: “Not in a million years. Audrina is moving in a completely different direction than those two … she’s a star.” Brody Jenner’s people responded with, “No … Brody’s not that hungry for bugs or camera time.”

Jun 3rd 2009 9:50AM – Spencer to Audrina: ‘You’re a Ho!’
Firing back at Audrina’s derogatory response when asked whether she would be on I’m A Celebrity, Spencer says, “Heads up, Audrina. Just because you have a one night stand with a guy who’s in a movie called ‘Star Trek’ doesn’t make you a star. You’re just a ho.” Spencer also reveals that all the jungle dram so far was just a “mental fake out to mess with the competitors.” In what may have been another aspect of the mental fake out, a Speidi decoy is spotted arriving at LAX.

****Special Insert**** The TMZ folks missed an important part of the narrative at this point. Heidi and Spencer asked to be back on the show, which the producers were willing to allow under two conditions: Number one, the couple had to spend the night in the spook shack. Number two, if they made it all night, the other cast mates would have to support the return. So, the couple went off for their romantic evening in the shack while the cast mates were told of the arrangement and began debating.

Jun 7th 2009 9:40AM – Producers to Speidi — Let’s Go to the Video Tape!
Producers claim Heidi and Spencer’s claim of torture is absurd, saying the video tapes will back them up. Spencer tweets that Heidi was “locked in a dark room for 3 days w no food or water” but sources tell TMZ it was 8-10 hours max.

Jun 7th 2009 10:35AM – Heidi & Spencer — Tortured?
It is revealed Heidi was diagnosed with a gastric ulcer. Sources claim NBC execs tried to discourage Heidi from calling an ambulance and also that some cast members wanted to leave but NBC was holding their passports. TMZ reportrs: “We’re told Spencer has fired his lawyer (who wanted him to stay on the show) and is now planning to sue NBC over the show.”

Jun 7th 2009 4:55PM – Producers Fire Back at Heidi & Spencer
ITV Studios issues a statement claiming Spencer’s accusations are untrue and that “The health of the celebrity participants are of the utmost importance.” They also pointed out that they have a medic and doctor on set at all times and “allegations of the celebrities being deprived of food and water are completely untrue.”

Jun 7th 2009 5:19PM – Spencer’s Got it All Wrong
A source on set disputes a list of Spencer’s accusations, including the notion that Spencer and Heidi were ever in danger and that some of the cast members were being held against their will.

Jun 8th 2009 11:15AM – Doctors Put Speidi in No Fly Zone
Heidi and Spencer try to leave Costa Rica but can’t get doctor’s clearance. 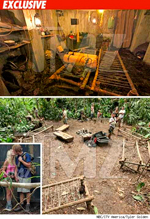 Jun 8th 2009 1:32PM – Inside Speidi’s Torture Chamber!!!
Exclusive photos of the “torture chamber” where Speidi spent the night and the camp site where the other contestants are staying.

That pretty much gets you all caught up in time for tonight’s episode! Rumor has it Heidi’s sister Holly Montag will be joining the cast! (That was a criminal misuse of an exclamation point) If you’re actually interested in the show itself, and which celebrities have been eliminated, keep up with our contestant chart.

Heidi Montag’s body is scarred from her 10 plastic surgeries