2009 is starting off great for Melrose Place fans! E! is reporting that our Ace of Spades Heather Locklear has been contacted regarding a reprisal of her role as Amanda Woodward on the CW’s upcoming resurrection of the series.

“The CW is courting Heather Locklear,” a source exclusively reveals to E!. “I don’t think anyone else from the original has been approached yet.”

The source also says casting announcements may start as early as next month! We need to get on the ball with our Melrose Place Revisited Most Wanted Card Deck! Here are two more entries:

Two of Diamonds: Sandy (played by Amy Locane)
Arnold Schwarzenegger can do a better southern accent than actress Amy Locane. Kudos for the people in charge at MP who realized early on that a hot body and ridiculous plot twists could distract from bad acting, but wasn’t quite enough to draw our attention away from horrible acting. (Locane’s character Sandy  landed a role on a soap opera in New York after only 12 episodes, never to be heard from again) If The CW is planning on bringing Lacone back (certainly they could afford her) we hope it’s as a coma patient. 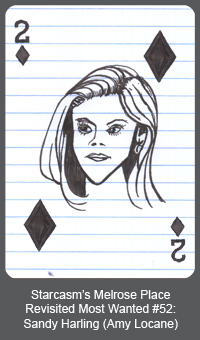 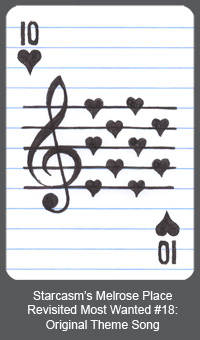 Ten of Hearts: The Original Melrose Place Theme Song (by Tim Truman)
Our first non-human to make the list, this late-80s-style electric guitar masterpiece set the stage every week, alerting everyone in the house that it was time to drop what they were doing and rush to the living room. I’m afraid that The CW will try to “modernize” it somehow, but there’s really no need. At the very least, run it over the closing credits so we will know when to leave the couch and return to our lives. (Just click the little “play” triangle for a Melrosian audio flashback)
[audio:https://www.starcasm.net/mp3s/MelrosePlace.mp3]

3 contestants revealed for Dancing With The Stars Season 14