Oprah’s bid to take over the world is progressing on schedule. She already has the President in her pocket, control of the New York Times Bestseller List, the soon-to-be-launched Oprah Winfrey Network (OWN) and now a three-year deal with Home Box Office.

The deal between HBO and Harpo Productions is for scripted Winfrey-approved movies, shows and documentaries while the Oprah Winfrey Network will basically be an expanded version of the Oprah Winfrey Show, with unscripted programming designed to unleash “the power of human potential, that’s what it’s about,” according to Oprah. Harpo’s current contract with ABC expires in 2009 and that’s when the new deals kick in.

We wish we could be more sarcastic, but as we have said before, anyone that can get 300 million people to read William Faulkner deserves a tip of the hat. You know you have a quality show when boobies and profanity wouldn’t improve it much! (Well, I suppose Jennifer Aniston in just a necktie would have made her interview seem like two hours instead of eight.) Oooo – and excessive violence would be nice when Scientologists break out into couch spasms. Ummmm – she could interview Rod Blagojevich and his wife without bleeping 85% of the responses? … 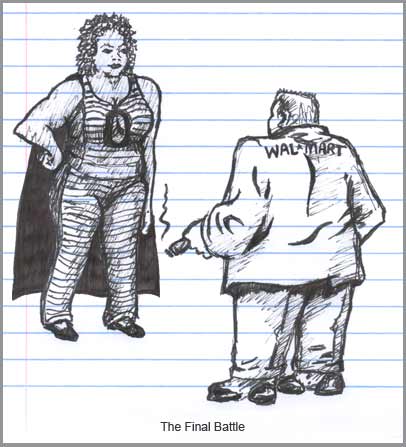 No deal like this could happen without us making a few predictions, so here goes:

As part of the deal with HBO, Oprah gets to change the name of the network to BHO in honor of Barack Hussein Obama.

To remedy its lame demise and bring some closure to fans, Oprah will revive The Sopranos for two more episodes, during which Tony will switch from Dr. Melfi to Dr. Phil, who will convince Tony to retire from “sanitation” work, write a book and go on Oprah. Carmela will take an apprenticeship at a finance firm and earn a full time position by outperforming everyone else. Meadow will….(Insert Oprah’s Book Club plot here)

2009 will see the launch of the reality show “Oprah’s Big Love” in which contestants try to figure out the most creative way in which to give away 100 Mormon brides.

Curb Your Enthusiasm takes a wild turn when the California wildfires force Oprah to move in with Larry David. Tensions mount thanks to flippant comments from Larry like, “You think Obama will call his cabinet a posse? That would be really cool. ‘Hey America, I’d like to introduce my posse,'” and “I’ve never been big on the reading thing. Nope, not a big book guy. Pretty, pretty, pretty boring.”

A special HBO-sized version of “My Favorite Things” will air during which Oprah gives every member of the studio audience a Barack O’Bobblehead doll, a solid gold refridgerator with built-in dvd player and a US automobile company.

Oprah will FINALLY be able to make “Gone With the Winfrey,” the epic romance story of Stedman and Oprah – “A fire burns in their neighborhood and in their hearts.”