It seemed laughable when Tamra Barney called out Gretchen Rossi for a lack of moral character during Bravo’s Real Housewives of Orange County reunion show last month, but the more I learn about Gretchen, the more Tamra is starting to resemble a nun (a nun with blonde hair, breast implants, an over-inflated sense of entitlement and complete lack of spiritual depth – the kind of nun that would star alongside Steven Seagal in the action/adventure movie Praying for Keeps. But, a nun nonetheless…) 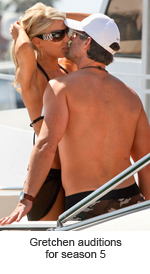 The latest on Grossi is that she is swapping spittle (and probably more) with OC veteran Slade Smiley. Slade, whose name sounds like a used car salesman from a Coen Brothers movie, seems to be Orange County’s hot brotato – an ex-fiance of former OC “housewife” Jo De La Rosa and also a former boyfriend of cast member Lauri Waring. (He had a short-lived reality show with La Rosa called “Date My Ex: Jo & Slade,” which was exactly what it sounds like, and lasted exactly as long as it should have) Most everyone assumes the “hook-up” is just a stunt to increase the likelihood the two will be invited back to the show next season. (More icky photos here)

What makes Gretchen’s reprehensibility stand out among the other current cast members (I just started watching the show last season) isn’t that she seems a bit sl**ty, or that she had a terminally ill sugar-granddaddy that she wasn’t much comfort to; it’s her weaselly dishonest desperation.

I know a lot of what we’re shown of these women’s lives is polished over and artificial (like much of their bodies) but it seems “real” enough to warrant being called a reality show. Between all the charity events and manufactured drama there are accurate glimpses into life on the “other side of the tracks,” most of which are unflattering to the women and the families involved. Gretchen not only doesn’t have a family, but everything she is and does on the show is because she desperately wants to be on the show! And unless they start filming her when she doesn’t know she’s being filmed, she might as well be on The Hills or the new Melrose Place! So, as an officially uncloseted fan of TRHOOC, let me be the first to cast my vote to not bring Gretchen Rossi or Slade Smiley back next season!

(Ha ha! I’m talking all serious about the Housewives of OC! Where’s the snark? Where’s the goofy drawing?!?)

Even if this latest act of sleazy and desperate fakery doesn’t merit her return to the show, Gretchen Sleepswithanymanshecomesacrossi may have other options to choose from. During last season’s episode in which she was at a party and received a Harley Davidson motorcycle from her hospitalized fiance, Gretchen was able to show off her mad chopper skills (the ability to sit on it without falling off), and that combined with her sack-hopping proficiency have spawned rumors that Gretchen will play the lead in this remake of the 1969 Dennis Hopper and Peter Fonda classic: 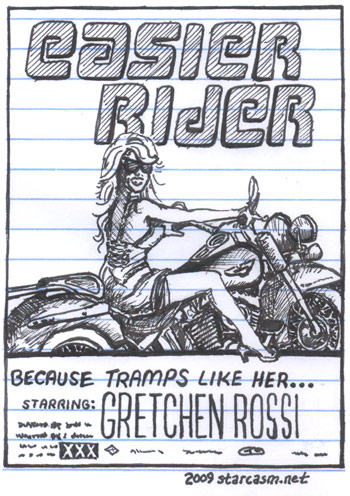