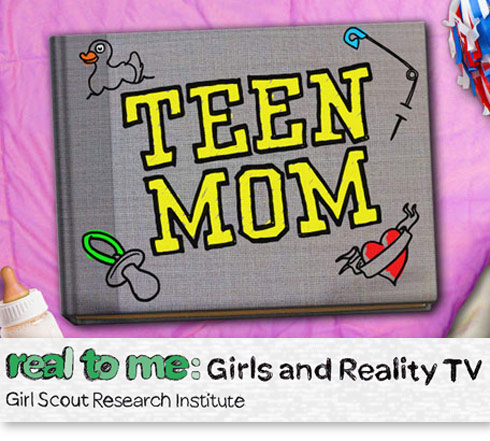 The Girl Scouts of America released a study earlier this week that seems to suggest young women today are picking up a lot of bad traits from watching reality television. The study, called “Real to Me: Girls and Reality TV,” polled 1,141 girls ages 11–17 and states, “Tween and teen girls who regularly view reality TV accept and expect a higher level of drama, aggression, and bullying in their own lives, and measure their worth primarily by their physical appearance.”

According to Ad Age the panel discussion was going along smoothly until Zarin said MTV’s reality show Teen Mom “is like birth control,” which seems in line with another study done by The National Campaign to Prevent Teen and Unplanned Pregnancy (see below). This statement riled up fellow panelist Jess Weiner, who tossed out the ol’ anti-Teen Mom/16 and Pregnant staple that she knows of girls purposefully getting pregnant in hopes of getting on the show.

Zarin and Weiner weren’t the only ones zeroing in on Teen Mom when talking about the study, check out this video clip from Fox Providence’s The Rhode Show that displays the Teen Mom logo as they talk about reality television promoting the notion of “mean girls:”

Detractors of Teen Mom may want to leave now because I am about to unload some serious TM whoop ass!

First off, let’s tackle this whole “girls getting pregnant on purpose to be on the show” thing. Sure, there are probably a number of girls who either intentionally got pregnant or were perhaps a little less stringent about using birth control because they dreamed of being on 16 and Pregnant and eventually Teen Mom. Let’s be crazy and estimate that number to be in the thousands. I am of the belief that a young girl willing to get pregnant for the minuscule chance of making it on a reality series was headed for trouble anyway. (No doubt this is the same girl who would get pregnant to make the quarterback stay with her or something similar, right?)

Now, let’s weigh those thousands against the hundreds of thousands of young girls who have Bentley’s poopy diaper, Farrah’s lack of friends, or Catelynn’s tears over giving her daughter up for adoption in the back of their mind when their boyfriend suggests they don’t need to use a condom! It’s like Dr. Drew always says on the Reunion Specials, young people aren’t going to listen to him telling them to practice safe sex, but they WILL listen to these teen moms and dads and they WILL watch their stories and learn from them. 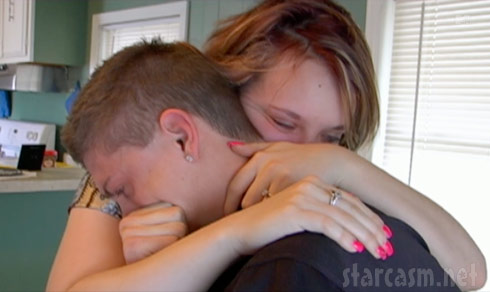 ^ Catelynn and Tyler promote the “glamorous” life of teen pregnancy?

I can remember being a teen and knowing that I didn’t want to get a girl pregnant, but to be honest, I didn’t really know what those consequences actually were. This show provides that. The convenience of not using a condom weighed against your youth being abruptly over, followed by a lifetime of commitment to your child just doesn’t seem like a difficult decision. So, even if there are girls out there getting pregnant with hopes of getting on the show, there are exponentially more unwanted teen pregnancies avoided thanks to the show. I absolutely believe that and look forward to the Girl Scouts study proving me right.

(Actually there has been a study done by the The National Campaign to Prevent Teen and Unplanned Pregnancy that revealed “82 percent of teens say the show helps them better understand the challenges of teen pregnancy and parenthood — and why they should avoid it.” Also, the U.S. teen birthrate fell dramatically in 2009 after a five percent increase from 2005 to 2007. In other words, Jill Zarin appears to have been correct!)

Second, let’s remember that this study features girls ages 11–17 and differentiates between those that do and don’t watch “reality TV” on a regular basis. So that means they could be watching Bad Girls’ Club, American Idol, Jersey Shore, The Real Housewives of New Jersey, Biggest Loser, Bridalplasty, Swamp People… whatever. My guess is that if they had just polled 1,141 Teen Mom viewers that the results would be vastly different, so it’s unfair that this show gets the brunt of the criticism based on the results from this study.

For example, most all of the articles being written on this study emphasize the “mean girls” traits being picked up by teenage girls watching these reality shows. I know that there is a lot of activity on Teen Mom and 16 and Pregnant that is far from mature, and sometimes even criminal (Amber and Jenelle), but where is this “mean girls” phenomenon on the show?!? 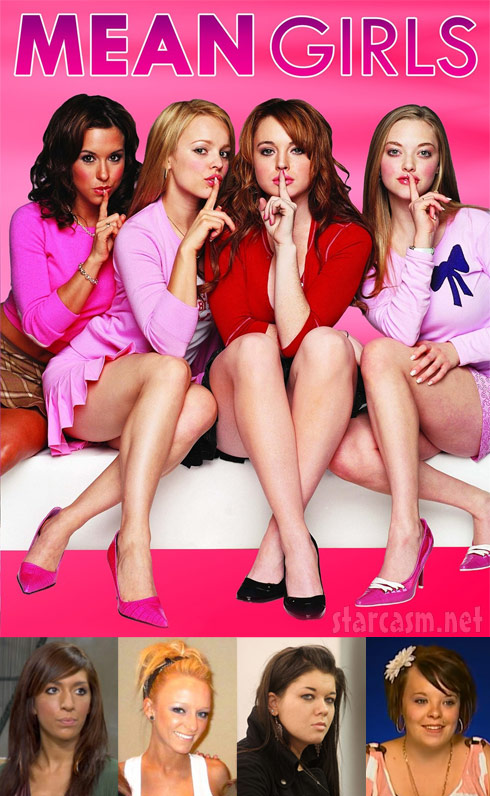 Being a “mean girl” implies being part of popular clique and being mean to other girls who aren’t as popular, yet one of the many struggles faced by most all of the girls on 16 and Pregnant and Teen Mom is that they are ostracized at school for being pregnant and almost all of them seem to wind up losing a good number of their friends because of it. So when do we ever see Maci or Catelynn or Kailyn being a “mean girl?” Although Amber Portwood obviously has rage issues, and was even arrested for attacking her ex Gary Shirley, she’s not being a “mean girl” in the traditional sense. And seriously, what teenage girl is watching Amber kick Gary as he’s walking down the stairs thinking to herself, “Oooooooo, I want to be that girl!”

Also, I’m no expert in doing studies or interpreting poll data, but it seems to me that in order for these claims to have any significance it would require a similar poll from before reality TV, right? Let me explain…

As I mentioned before, the survey featured 1,141 girls ages 11–17. Forty-seven percent of girls in this survey (536) are “regular” reality TV viewers, with 30% (342) watching “sometimes” and 23% (263) “rarely/never.” The study contrasts the 536 girls who watch reality TV regularly and the 263 girl who watch rarely or never. Here are some examples of their findings under the heading “Relationship Drama.”

I’m going to use that last one as an example. If we assume that the group of viewers who “sometimes” watch reality TV is right between the other two groups then what we have is roughly 661 girls out of 1,141 overall (about 60%) think that “it’s hard for me to trust other girls.” [63% of reality TV watchers (338) plus 57% of “sometimes” viewers (131) plus 50% of those that rarely/never watch (192)] So what we need is some sort of study from prior to there being a lot of reality programming on television to see if 60% of all girls thought it was hard to trust other girls then. Something tells me that number will be pretty much the same, if not higher. 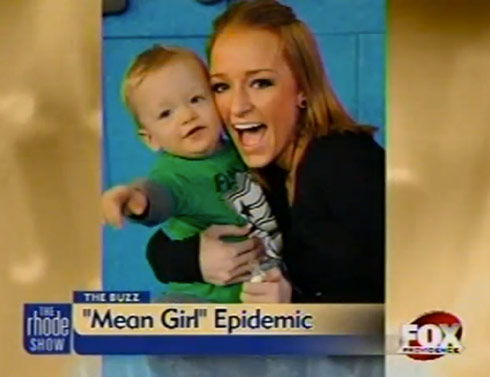 ^ Nobody puts baby in a corner and NOBODY puts Bentley on a “Mean Girls Epidemic” graphic! You have crossed the line Fox Providence!

Another fundamental flaw in the conclusions being drawn by numerous media outlets is that reality TV is responsible for increasing these negative traits in young girls. Once again, we can’t make those kinds of conclusions without data prior to reality television being so prevalent. It boils down to the question of the chicken and the egg: Are young girls more catty, gossipy, and untrusting because they watch reality TV or do they watch reality TV because they are more catty, gossipy, and untrusting?

I should point out that the study did have a few positive things to say about young girls who watch a lot of reality TV, but once again I think we have to approach it with “the chicken and the egg” skepticism.

• This group of girls is more self-assured than non-viewers when it comes to virtually every personal characteristic we asked girls about, with the majority of regular reality TV viewers considering themselves mature, a good influence, smart, funny, and outgoing.

• Seventy-five percent of girls say that reality shows have inspired conversation with their parents and/or friends.

• Many girls receive inspiration and comfort from reality TV, with 68% agreeing that reality shows “make me think I can achieve anything in life” and 48% that they “help me realize there are people out there like me.”

• Seventy-five percent of girls say that reality TV depicts people with different backgrounds and beliefs. Furthermore, 65% say such shows introduce new ideas and perspectives, 62% say the shows have raised their awareness of social issues and causes, and 59% have been taught new things that they wouldn’t have learned about otherwise.

In summary, let me say that I think the knee-jerk negative responses to 16 and Pregnant and Teen Mom all stem from the fact that people assume the shows glamorize teen pregnancy and motherhood, which I just don’t understand if you have actually seen the shows! Obviously unwanted teen pregnancies are something to be avoided, and MTV is relentless in trying to bring that point home. But, the best way to help young people avoid making that mistake is not to pretend it doesn’t happen!

And another thing, while I’m on my Teen Mom high horse, I don’t understand people being upset that these girls are now making a rather large amount of money for appearing on the show. They are being compensated for sharing their struggles on national television, struggles which are NOT glamorous by any stretch of the imagination. I don’t see any difference between them making money on their stories or some author writing a best-selling autobiography about the struggles of being a teen mother. If the story is compelling enough that people want to watch or read it, then these girls deserve to be compensated! It’s like people complaining about athletes getting paid so much when it is a simple economic fact that they wouldn’t be paid that much unless they were generating that much revenue and more in the first place! (Same goes for the cast of Jersey Shore or the creator of the pet rock.)

Thus ends my diatribe. I now return you to your normal gossip and viral videos. 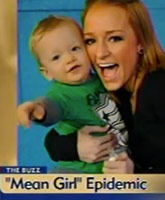