Clay Aiken is officially coming out of the closet in an interview with People magazine that hits stands on Wednesday. 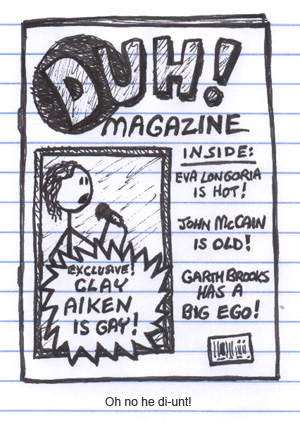 The announcement will most surely come as a shock to his tens of fans, and may force the Broadway production of “Monty Python’s Spamalot” to shut its doors. Aiken recently returned to the role of ‘Sir Robin’ in the musical and there are concerns that homophobic Broadway musical-goers might boycott because of the outed superstar. Clay’s chances for acceptance are slim considering that the only gay man Broadway audiences have been able to embrace so far is Liza Minnelli.

We here at starcasm.net would like to help you Clay. We believe your talents would translate nicely into the gay adult film industry. We already have a script in the works for “A Hairy Can Idol” starring Butt Aiken, but if you don’t like that screen name, it would be no trouble switching to Assius Clay. Call us! We’ll make it work, girl!