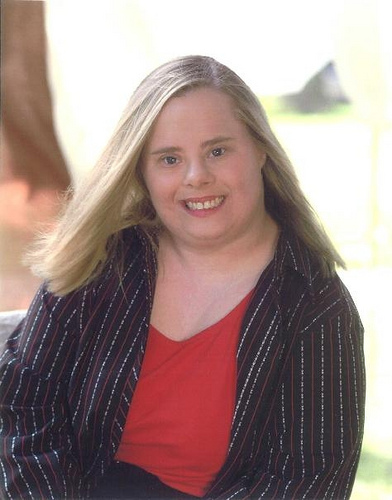 Sarah Palin, who’s got a deal with FOX News, was appalled at the envelope-pushing Fox Network show The Family Guy after they used a character with Down Syndrome to poke fun at her. In the scene a teenager with Down Syndrome named Ellen tells her date “My father is a CPA and my mother is the former governor of Alaska.” As Family Guy goes, this joke isn’t really shocking, it’s really just a random pop culture reference.

Oddly enough one of those cruel, cold-hearted people and heartless jerks is voice actress Andres Friedman, who voiced the character of Ellen and has Down Syndrome. She also has something Sarah Palin has proven time and time again that she doesn’t have: a sense of humor.

Friedman, who’s also worked in television for 18 years appearing on shows like Saving Grace, ER, and 7th Heaven, composed a email in response to Palin’s disapproval, criticizing her for not having a sense of humor, and carrying around Trig “like a loaf of French bread” trying to gain sympathy and votes.

Friedman is a firecracker! This is the best way to stand up for people with Down Syndrome, to expect the same treatment as anyone else, not ask to be coddled, and to be able to take a a joke once in a while.

Here’s the full email she sent via comment to the New York Times:

“My name is Andrea Fay Friedman. I was born with Down syndrome. I played the role of Ellen on the “Extra Large Medium” episode of Family Guy that was broadcast on Valentine’s day. Although they gave me red hair on the show, I am really a blonde. I also wore a red wig for my role in ” Smudge” but I was a blonde in “Life Goes On”. I guess former Governor Palin does not have a sense of humor. I thought the line “I am the daughter of the former governor of Alaska” was very funny. I think the word is “sarcasm”.

In my family we think laughing is good. My parents raised me to have a sense of humor and to live a normal life. My mother did not carry me around under her arm like a loaf of French bread the way former Governor Palin carries her son Trig around looking for sympathy and votes.”