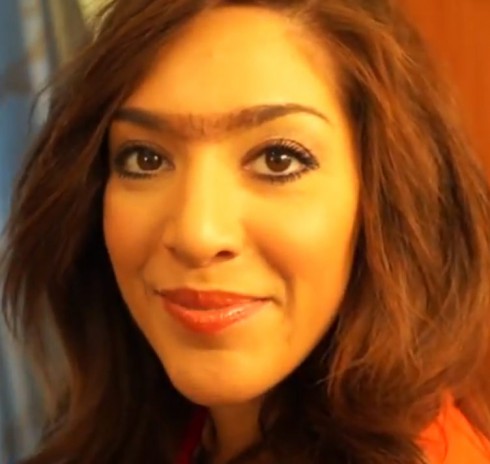 Unflappable Teen Mom veteran Farrah Abraham has posted a beauty tip video in which she… Hell, you see that photo!

Abraham made a ton of headlines a while back when she waxed nostalgic about waxing and plucking her 3-year-old daughter Sophia’s eyebrows. News agencies took to the story as many questioned whether the act was an appropriate thing for a mom to do.

Proving the media power of the Teen Mom phenomenon, this thing went as far as Abraham appearing on Good Morning America to defend herself. During the report they rolled out a dermatologist who stated that plucking of the eyebrows should begin no earlier than ages 7-8. Dr. Doris Day said (yes – that’s her name):

At 3 0r 4-years-old the skin is definitely very sensitive and very delicate. And to wax the skin of a 3-year-old you have a higher risk of creating a burn.

In Farrah’s own unique way, she has quasi-responded to all of this again by uploading a beauty tips video to her YouTube account in which she transforms from “Regular Farrah” to “Unibrow Farrah.”

“I’m gonna bring out my daughter Sophia, who was, like, sadly in the news on like ABC and the ‘Cooper Show’ or whatever and these people were trying to, like, bring up the unibrow as like ‘Toddlers & Tiaras’ or something – which is so not the case for me.”

When Farrah goes to fetch Sophia after revealing her new look, her daughter can be heard saying, “I don’t want to do my unibrow.”