The formerly famous invisigoth rocker Marilyn Manson has maxed out yet another human being’s attention span. Actress/girlfriend Evan Rachel Wood becomes the 6,602,224,175th person to grow tired of Manson’s shock antics, breaking up with Marman and ending a relationship that started back in December of 2006.

The boredom may have been the biggest contributing factor in the make-up break up, but the straw that broke the camel’s back was Manson insisting that Evan’s slacker brother Ira move out of the guest house, a guest house owned by Evan. In our not-so-creative imagination we envision Ira to be a stereotypical jock big brother that constantly harangued Marilyn with well crafted barbs like: “Hey Pansy! After you finish your breast exam get me a beer!” or “Listen pretty boy, as long as you’re living under my sister’s roof you’ll do as I say. Now give me your ice cream.”

Marman finds himself single in an unfriendly market for his ilk. Women are only able to find one alterna-edgy black haired goth guy attractive at a time, and currently the title is held by Criss Angel. Without the possibility of a hot sugar momma, and since a new album would only bring in an estimated $137, rumors are already swirling that Manson may have to resort to desperate measures to prevent having to move into his sister’s guest house. May we suggest a movie deal? Here’s a high concept comedy guaranteed to be a HUGE success: 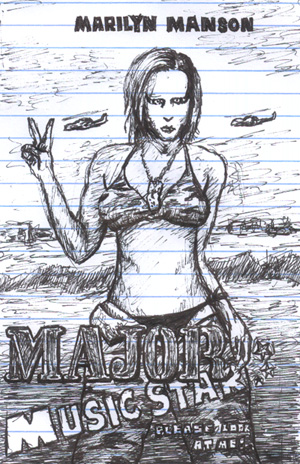 Under-shocked audiences in Russia and Bulgaria are already excited! There is no word when, or if, the movie will open in the US.

15 PHOTOS Katy Perry gets wet and wild in ‘Starstruck’ video shoot with 3OH! 3