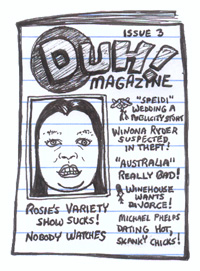 The third issue of “Duh Magazine” hit virtual stands today with these stories:

“Rosie’s Variety Show Sucks! Nobody Watches” NBC’s half-baked attempt at reviving the variety show failed when Rosie Live drew fewer viewers than the previous week’s episode of the new and disapproved Knight Rider series. NBC was supposedly putting feelers out to see if television audiences would be receptive to a revival of the variety show format, to which the answer was a resounding, “No!” But don’t blame the genre for that! NBC’s idea is like trying to bring back tight acid washed jeans by putting them on, well, Rosie O’Donnell! A variety show host can have a wide array of characteristics and still be successful, but annoying isn’t one of them.