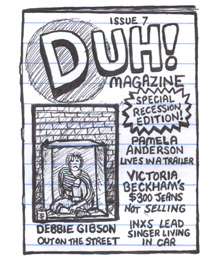 The seventh issue of Duh! Magazine hits virtual stands today! This is the “Special Recession Edition,” featuring stories you knew were gonna happen, they’re just happening sooner than you thought because of the woeful economy:

Deborah (Debbie) Gibson Is Homeless
Well, almost. Her home is being offered as a “short sale,” which means she’s probably facing foreclosure or accepting a sale price for less than what she owes. Debbie shouldn’t worry though, because there isn’t a single straight American male in his mid-30s out there that wouldn’t offer her a place to stay! (Click the link and check out photos of Debbie’s “Only In My Dreamhouse.” Is that a 7Up in the bathroom? Is that a urinal?)

INXS Lead Singer Living In His Car
The inaptly named J.D. Fortune won the reality show “Rock Star: INXS” and replaced former INXS lead singer Michael Hutchence, who committed suicide in 1997. But, after being fired via handshake in the Hong Kong airport, J.D. is now without money, without a home and living in his car

Victoria Beckham’s Line Of $300 Jeans Not Selling
This one may not be the economy’s fault at all. A source says, “Nobody wanted to buy $300 jeans from someone who is not a trained designer. ” Oh SNAP!

Pamela Anderson Is Living In A Trailer
Pamelamma Ding Dong will be putting the “ho” in mobile home thanks to moving in with her electrician boyfriend. Now we just need to figure out what trailer park Yasmine Bleeth is living in.