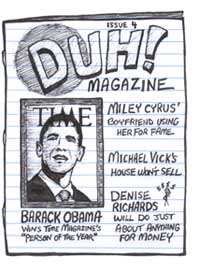 The fourth issue of DUH! Magazine comes with a bonus holiday insert! So not only do you get the best obvious stories on the internet, but you also receive the special “Confessions” supplement which features that which you already knew straight from the horses’ mouths! But first, here are the headlines from Duh!

Denise Richards will do just about anything for money! 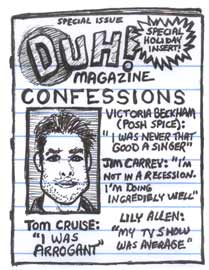 Tom Cruise: “I Came Across As Arrogant.”
Tom Cruise went on the Today Show more than three years after his infamous arrogantastic interview with Matt Lauer. This time around Tom was able to muster at least a little humility when he admitted that he was wrong in HOW he was completely right in the previous interview, and perhaps he could have been completely right in a more pleasant manner. That’s what we want: a kinder, gentler arrogance.

Victoria Beckham:
“I was never that good a singer.”