Welcome to the second issue of Douche Bagazine, your source for all things douchey! Thanks to everyone that helped make the premier issue such a success! As long as there’s a demand for newsworthy douche baggery, you can expect a new issue to hit virtual stands every month! 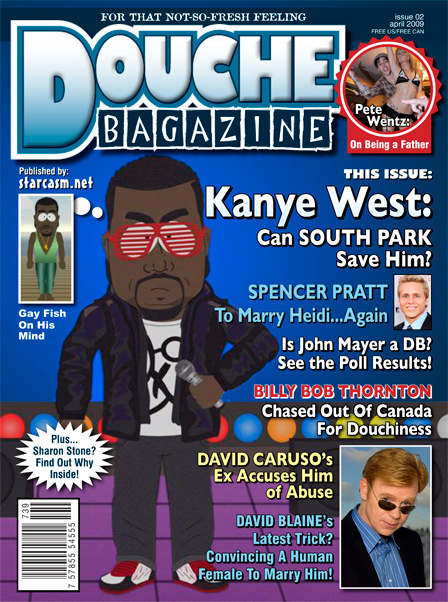 South Park called out Kanye West and his HUGE ego in their “Fishsticks” episode, concluding with Kanye literally becoming the punchline of a joke and giving in to everyone’s assertion that he is a gay fish:

(Don’t understand the gay fish reference? Watch the episode – it’s hilarious! If you don’t catch it on television, you can watch the full episode on Comedy Central’s web site starting May 9.)

It seems being chastised by South Park was something even Kanye’s ego couldn’t overlook, which resulted in a Kanye blog post the next day that bordered on sincerity and humility. (Though not humble or sincere enough to abandon his love for the CAPS LOCK key)

SOUTH PARK MURDERED ME LAST NIGHT AND IT’S PRETTY FUNNY. IT HURTS MY FEELINGS BUT WHAT CAN YOU EXPECT FROM SOUTH PARK! I ACTUALLY HAVE BEEN WORKING ON MY EGO THOUGH. HAVING THE CRAZY EGO IS PLAYED OUT AT THIS POINT IN MY LIFE AND CAREER. I USE TO USE IT TO BUILD UP MY ESTEEM WHEN NOBODY BELIEVED IN ME. NOW THAT PEOPLE DO BELIEVE AND SUPPORT MY MUSIC AND PRODUCTS THE BEST RESPONSE IS THANK YOU INSTEAD OF “I TOLD YOU SO!!!” IT’S COOL TO TALK SH*T WHEN YOU’RE RAPPING BUT NOT IN REAL LIFE. WHEN YOU MEET LITTLE WAYNE IN PERSON HE’S THE NICEST GUY FOR EXAMPLE. I JUST WANNA BE A DOPER PERSON WHICH STARTS WITH ME NOT ALWAYS TELLING PEOPLE HOW DOPE I THINK I AM. I NEED TO JUST GET PAST MYSELF. DROP THE BRAVADO AND JUST MAKE DOPE PRODUCT. EVERYTHING IS NOT THAT SERIOUS. AS LONG AS PEOPLE THINK I ACT LIKE A B*TCH THIS TYPE OF SH*T WILL HAPPEN TO ME. I GOT A LONG ROAD AHEAD OF ME TO MAKE PEOPLE BELIEVE I’M NOT ACTUALLY A HUGE DOUCHE BUT I’M UP FOR THE CHALLENGE. I’M SURE THE WRITERS AT SOUTH PARK ARE REALLY NICE PEOPLE IN REAL LIFE. THANKS FOR TAKING THE TIME TO DRAW MY CREW. THAT WAS PRETTY FUNNY ALSO!! I’M SURE THERE’S GRAMMATICAL ERRORS IN THIS… THAT’S HOW YOU KNOW IT’S ME!

This sparks the age old debate – nature or nurtue? Is someone born a douche bag or do they become one? Can someone be cured of simple chronic douche bagitosis? Perhaps Kanye will be the one to end the debate once and for all. But, until he does, Yeezy will remain close to the hearts of everyone involved with Douche Bagazine. 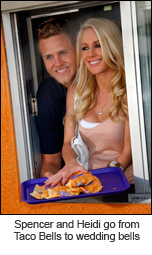 Whenever bringing up nature or nurture, you can be assured that another inevitable controversial debate is not far behind: Should douche bags be allowed to legally get married? Apparently there is no Prop 8 for this in California because that’s where Spencer Pratt plans to wed his fame mongering faux-ancé Heidi Montag later today. The couple will be using their own professional photographers because they did not receive an offer for an exclusive that they were happy with. It is rumored OK! magazine made an offer for the exclusive, but apparently it wasn’t enough. What?!?! Who doesn’t want an exclusive in OK! magazine?!? Why, that’s pretty much the same as getting an exclusive in Pretty Good! or Not So Bad!

The couple previously married in Mexico in what was later revealed to not be a legal ceremony but just another Speidi publicity stunt. Soon after the wedding, Speidi will begin filming for the summer reality show I’m A Celebrity, Get Me Out Of Here! in the jungles of Costa Rica with co-stars Janice Dickinson, Sanjaya, Stephen Baldwin, John Salley and Torrie Wilson. (Illinois governor Rod Blagojevich was also scheduled to be on the show, but a judge ruled that he could not leave the country due to his pending trial.) 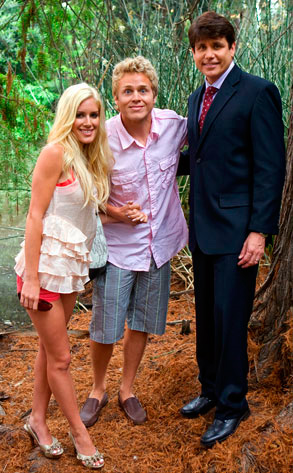 Last month’s issue featured a poll on whether or not singer John Mayer was a douche bag or not. Here are the results so far:

Until those numbers flip flop, John Mayer is fair game! That being said, J May seems to have rebounded quickly from Jennifer Aniston and is currently dating 24-year-old former Hooters waitress and Miss Tropicana pageant runner-up Scheana Marie Jancan. Yet another celebrity entry for http://www.hotchickswithdouchebags.com 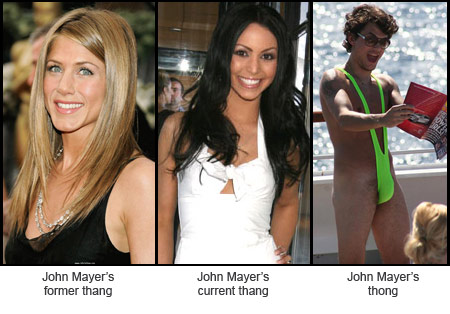 I don’t think it’s possible to have an issue of Douche Bagazine without the reigning King of Douchebaggery, Pete Wentz. What’s the latest from creepy Pete? While wife Ashley was at home posting photos of their four-month-old son Bronx on Twitter, Pete Wentz was performing on tour with Fall Out Boy and later on stage with strippers at a casino in Las Vegas: 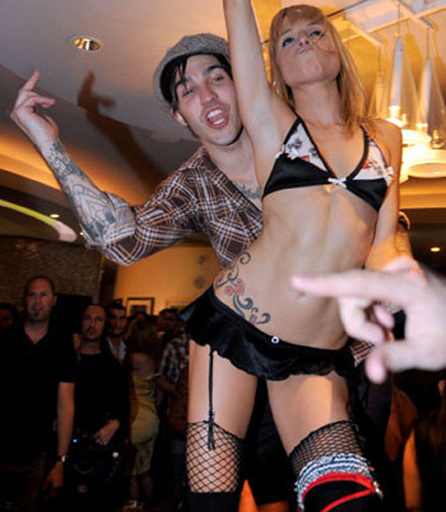 But ol’ Pete is trying to make up for it by blogging on The Huffington Post. He starts, “Since becoming a dad, I’ve been thinking about the kind of world my kid is going to grow up in.” It goes on to talk about the movie Invisible Children: Rough Cut about children in Northern Uganda fearful of recruitment into rebel leader Joseph Kony’s Lord’s Resistance Army. The altruistic Wentz goes on to say, “It was one of those times in my life where I was given a choice — continue ignoring the issue because it wasn’t in front of me, or forget about myself and do something. I was losing sleep, I had to go to Africa. My band Fall Out Boy traveled to Northern Uganda to film our music video ‘Me and You’ to see it for ourselves and my experiences have forever changed me.”

Pete Wentz wants to get to know strippers and African children. Maybe Fall Out Boy should have filmed their video in California so Pete can get to know his son?

(Thank you Pete. You know you are the inspiration for Douche Bagazine)

Billy Bob Thornton was chased out of Canada after pulling a Joaquin Phoenix during a radio interview in which a Canadian DJ had the nerve to mention Billy Bob was an actor before his two-year-old band The Boxmasters formed. If you’ve got some time to kill and a high tolerance for unwarranted assiness, here’s a video of the interview:

It seems Canadian audiences took special exception to being compared to “mashed potatoes with no gravy.” I took special exception to the fact that Billy Bob pulled all this crap while on tour with Willie Nelson. WILLIE NELSON! How could anyone within the radius of Willie Nelson’s halo of hippy holiness not be cleansed of all douchiness?!?! Needless to say, Canadian audiences heckled Billy Boob off stage and he was removed for the remainder of the tour. Here’s his less than half-hearted apology on the Jimmy Kimmel Show where Jimmy kisses his butt while Billy Bob tries to downplay the whole thing without ever really expressing regret:

In a way, I sort of agree with Silly Bob – that DJ had no right calling him an actor! BBT can say “French fried taters” and “I reckon” in an entertaining way, but he is NOT an actor! His official title is “douche bag that was humping Angelina Jolie for a while.” If the media could just get that straight, I’m sure Billy would keep his cool.

According to his ex-girlfriend, cheesy one-liners and bad acting aren’t the only ways David Caruso can cause pain. In legal papers stemming from their separation, Liza Marquez accuses Caruso of engaging “in an ongoing strategy of intimidation, isolation and control…with the goal of asserting and maintaining power…extending to all areas of her life and work during their relationship.” E! says:

During a stop in Paris in July 2004, she claims Caruso “asserted an irrational, jealous and abusive reaction” after she spoke to another man at an Internet café, and that he “proceeded to berate and emotionally abuse her” to the point where she was forced to “retreat to the bathroom and vomit.”

Here’s an unbelievable Caruso montage that will probably make you “retreat to the bathroom and vomit,” or laugh until you cry. (Thankfully, it was the latter for me)

Douche Bagazine BONUS! Thanks to the famously intrusive folks over at X17online, we have these photos of Sharon Stone. Even at 51, Sharon can still qualify as a hot chick with a douche bag! 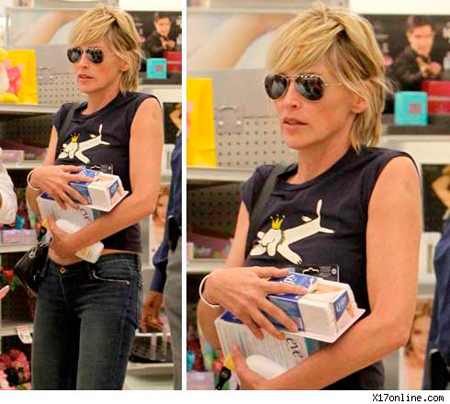