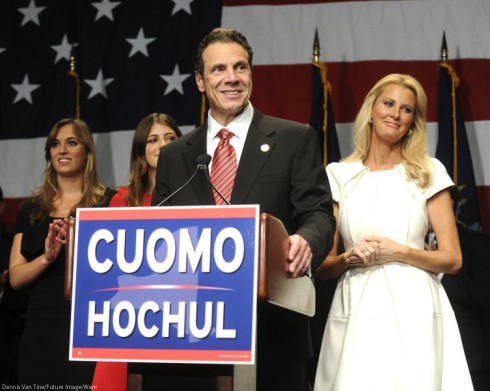 The New York Governor and Food Network star have been together since 2005, following his divorce from Robert F. Kennedy’s daughter Kerry Kennedy. (Andrew and Kerry have three daughters together.) Sandra was also previously married and already had a show on the Food Network when she and Andrew met at a party in the Hamptons.

So, after nearly one decade together, why aren’t Sandra and Andrew married? She said it’s simply not a priority — even though tying the knot would entitle her to extra benefits, such as State Police security.

“I think when it’s important to the kids, we’ll do it. Right now, we have much more important things to do,” she told Page Six in 2011, shortly after Andrew was elected governor. She added their relationship status didn’t seem to affect his political career, “We don’t even think about it, and nobody says anything.”

That same year, Sandra told Harper’s Bazaar she loves her special relationship with Andrew’s teenage kids, whom she affectionately refers to as her “semi-homemade daughters.”

“Everybody’s cool with it. I absolutely feel like they’re mine when they’re with me,” she said. (Sandra, Andrew and his daughters appeared together in the following campaign video.) “We just have a good time together.”

Even though Sandra helped in Andrew’s campaign this year — unlike in 2010 — she strives to maintain her own identity: According to Page Six, she shut down all questions about her partner at an AIDS benefit last weekend so that she could talk instead about the cause.