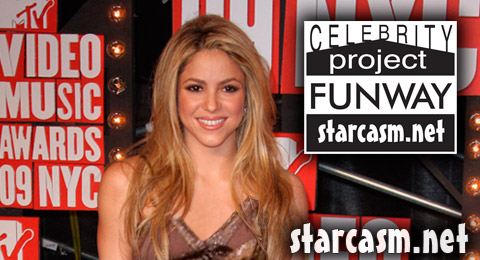 In this week’s episode the designers had to make an outfit for their models to wear to a special event which would have a number of fashion bigwigs in attendance. The goal was to create a look that accentuated the unique qualities of the particular model and to make them stand out in a crowd of other beautiful women. 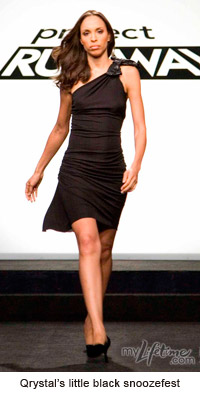 It seems like I’m always disappointed with the episodes that have a vague challenge and no limitations on the materials, mainly because you don’t have an extra measuring stick by which to grade the designs. If the outfits were meant to be worn in the opening ceremonies of the Olympics we can measure them on how successfully they fit the bill. Also, if the contestants were only allowed to use materials from a candy store, we can measure them on how creatively they approached the challenge. All of this is on top of the usual standards by which fashion is judged – style, fit, craftsmanship, etc. But, this week all we really had was the “usual standards by which fashion is judged,” which not only seems to limit the possibility of seeing something astonishingly great, but also means we probably won’t see anything catastrophically bad either. Meh.

And that’s exactly what happened in week four. The best design (made by Althea) was well-made and did seem ready to wear, but there just wasn’t anything all that exciting about it. And the worst outfit was just a boring black dress. Ho hum.

I’m a little late with this week’s Project Funway partly because of all the VMA drama and partly because one of the entries took a little extra time because I had to draw part of it. Also, I’ve only got two offerings this week as opposed to three. (How much do I suck?) I was going to put Qrystal’s bland offering on one of the “Addicted To Love” girls from the infamous Robert Palmer video, but apparently there isn’t a single decent image or screen capture of that video in existence!

I also strayed from custom in that I didn’t use the winning design either. It’s pure chaos here at Project Funway! The first design is the form-fitting lattice-work effort from Epperson, whose model asked for an almost impossible combination of tiger, elegance and punk. My first choices were Courtney Love and Avril Lavigne, but I couldn’t find a photo of Courtney standing upright and didn’t have luck matching up Avril either. So, I went with the elegant punk tiger Shakira! Here she is modeling Epperson’s look at the 2009 MTV Video Music Awards: 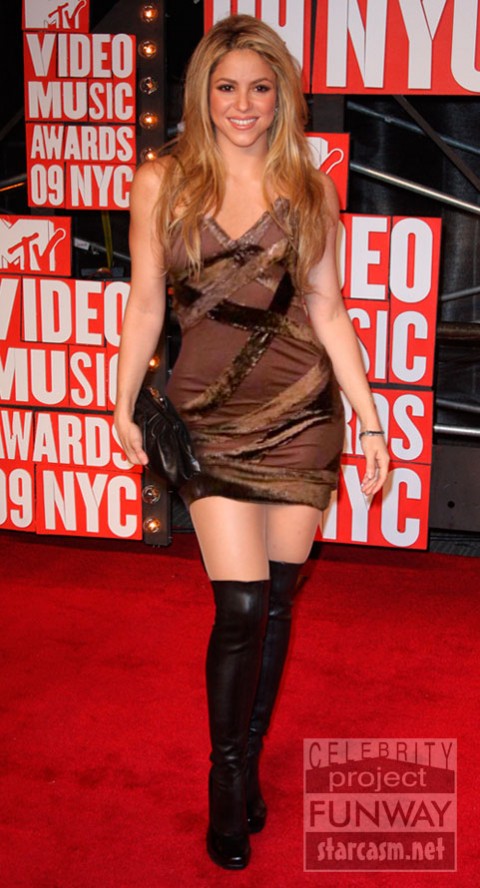 Second up on this week’s PF installment is Logan’s prom dress. I was inspired by his remark to Tim Gunn that the color reminded him of the Smurfs, to which Tim frustratingly responded, “Oh, I wish you hadn’t said that. I don’t want you using that word again.” (Or something to that effect.) So, I give you the lovely Smurfette! 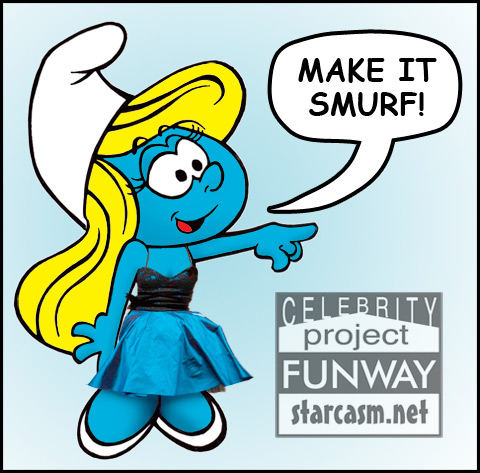 That may be my favorite so far, though the Big Lebowstique is pretty great, too.

Be sure to check out the original large-sized images of the designs I used as well as Althea’s winning look on PAGE TWO.