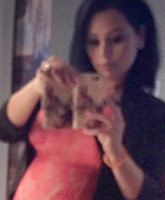 Former Jersey Shore star Jenni "JWoww" Farley celebrated her 30th birthday in Florida over the weekend, and she recently shared a special gift with fans in the form of a new photo of her growing baby bump! Keep reading to see JMomm's growing bun oven as well as some happy birthday wishes from her former meatball bestie Snooki, husband Roger, and former Jersey Shore co-star Sammi Sweetheart!
Read More... 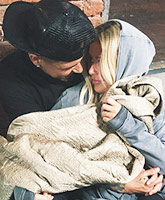 It's O'Fficial! Former Danity Kane singer Aubrey O'Day has confirmed what has been rumored for months, that she and former Jersey Shore star DJ Pauly D are currently dating! Keep reading to see numerous photos of celebridom's hottest new couple, and find out the Paulbrey origin story directly from Aubrey!
Read More... 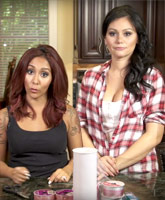 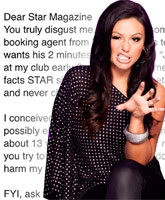 After skyrocketing to fame on one of the most popular reality shows of all time, former Jersey Shore star Jenni "JWoww" Farley has learned to roll with the punches when it comes to online haters and false reports in the media. But, the pregnant mother of one draws the line at accusations that she would harm her children in any way, which is exactly what Star magazine did in a recent article.
Read More... 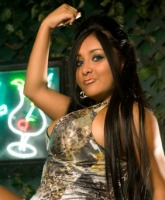 One big thing that Nicole Polizzi credits (or blames) for making her act "stupid" on Jersey Shore is slightly unexpected. Find out why she says junk food is what caused her antics and how she changed after she started to eat better...
Read More... 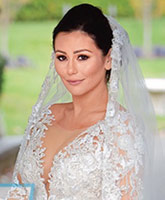 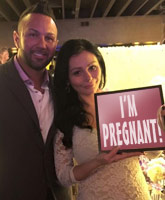 Leave it to former Jersey Shore star JWoww to upstage her own wedding! The 29-year-old reality star married her fiance Roger Mathews at a ceremony in New Jersey on Sunday, and the couple surprised family and friends in attendance by announcing JWoww is pregnant with baby number two! UPDATE - JWoww has since confirmed the news with an Instagram photo of the reveal, which was a huge banner of Meilani with the words, "I'm going to be a big sister May 2016!" Keep reading to see the picture.
Read More... 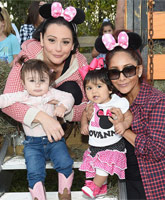