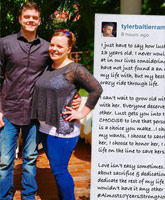 Teen Mom couple Catelynn Lowell and Tyler Baltierra have been together nearly ten years now, and Tyler took to Instagram today to express exactly how he feels about his "soulmate" in a wonderfully humble and appreciate message sure to have you feeling all the feels. Plus, a gratuitous awwwwwwwesome photo of Novalee with a downright intimidating blue steel gaze!
Read More... 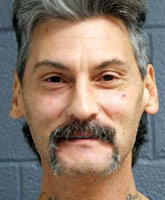 On this season of Teen Mom OG, Tyler Baltierra talked about how his dad Butch Baltierra actually made for a great roommate and even went so far as to say that he and Catelynn were considering letting him crash with them again when he got out of prison. So has that happened already? Is Butch still in prison or is he a free man once again?
Read More... 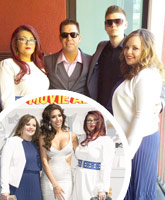 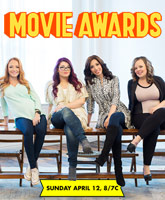 On the current season of Teen Mom OG, MTV has allowed the fact that the the cast members are celebrities now to be a part of the show, and it appears that the network is now treating their Teen Mom stars as celebrities off screen as well by inviting them to attend the 2015 MTV Movie Awards! Keep reading to find out who will be there and who won't.
Read More... 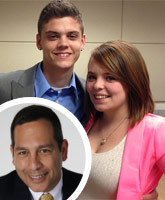 One of the effects of MTV dropping the fourth wall on the current season of Teen Mom OG is that the conflict between co-stars (i.e. Farrah Abraham and the other moms) is now part of the on-screen storyline. In the latest chapter of the ongoing feud between Farrah and co-stars Catelynn Lowell and Tyler Baltierra, Farrah's dad Michael Abraham responds to Tyler's negative comments about his parenting skills by challenging him and Catelynn to meet with a "professional interviewer" and "discuss this item with the objective to clear up this mess." Keep reading for Michael's lengthy statement and his response to those commenters suggesting he just let it go.
Read More... 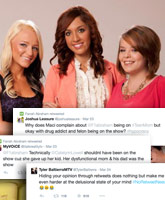 Due to the fact that MTV initially planned on excluding Farrah Abraham from the new season of Teen Mom, the 23-year-old was not featured at all (aside from a few Couples Therapy Reunion clips with Catelynn) in the season premiere episode Monday night. But, that didn't prevent Farrah from stirring up some off-screen drama during the premiere as she interacted with fans on Twitter -- including a number of retweets that were lamenting her absence and putting down her Teen Mom OG co-stars. Of course, that didn't go over very well.
Read More... 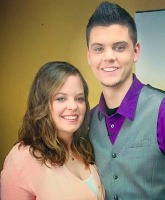 The preview for the rest of the season of Teen Mom OG seems to feature some tense moments between Catelynn Lowell, Tyler Baltierra and the adoptive parents of Carly. See what Catelynn now says about their current relationship.
Read More... 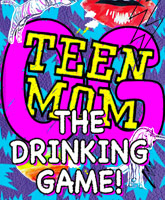 As most of our readers are probably aware, the Original Girls of Teen Mom return tonight at 10/9c for the premiere of Teen Mom OG on MTV, and in honor of the new season we thought we would put together a little something to help make watching the new season even more fun: The Teen Mom OG Drinking Game! (Alcohol not required.)
Read More...
We use cookies to ensure that we give you the best experience on our website. If you continue to use this site we will assume that you are happy with it.OkNoPrivacy policy