The cameras are rolling for Love & Hip Hop Atlanta's new season, so of course things have to heat up–and it looks like Jessica Dime's alleged sex tape will do the trick! According to a tangled web of love triangle lies, a jealous former lover may have leaked Jessica's tape as payback for the love she found with a new boo. Read on for the allegations–plus a pair of clips from the tape itself!
Read More... 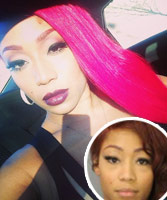 On 4/20 the cast of Love & Hip Hot Atlanta are ready to fire it up for another season of VH1's wildly popular reality drama. The show is tossing in some new additions to stir up the pot even more, if that's possible, and one of the newcomers is Jessica Dime. Check out the dancer turned rapper turned reality star's intro video and learn about a 2013 arrest that we unearthed including the booking photo.
Read More...