Don’t know who Carnie Wilson is? That means you weren’t a fan of such television classics as Gone Country, Celebracadabra, Outsider’s Inn, Celebrity Fit Club 4 or the Ricki Lake-alike Carnie! She was also 4/5 of the early ’90s trio Wilson Phillips, whose airy pop vocals were overshadowed by Carnie’s pioneering work in the art form of creatively hiding behind objects.

No matter if they were making a video or shooting photos, Carnie could ALWAYS find something and transform it into a screen with enormous dignity and grace. It could be a rock outcropping on the beach, sheets on a clothesline, a city bus, or even Wendy and Chynna themselves, who were usually standing around in scanty elegant evening wear looking just attractive, completely oblivious to the genious taking place behind them. Sadly, Carnie Wilson’s visionary and ground-breaking career was tragically cut short because of gastric bypass surgery. All we have are the few masterpieces from her small body of large body works, like this classic cover to Wilson Phillips’ Greatest Hits: 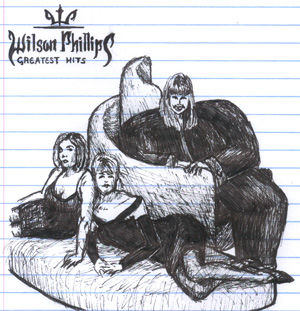