Sources have confirmed to People magazine that longtime companions Harrison Ford and Calista Flockhart are engaged. Harrison reportedly surprised Calista with an engagement ring on Valentine’s Day, after the couple had been dating for nearly seven and a half years. This is Indiana’s third time to the Temple of Groom, and for Ally McBride it will be her first time taking the plunge. No date has been announced.

Harrison has four children and three grandchildren from his previous marriages, while Calista has an adopted son. There is no word yet if the couple plans to have more children, but that won’t stop me from sharing this speculative sonogram!

A little known fact is that Harrison Ford and his super-thin fiance originally met on the set of Raiders of the Lost Ark. Harrison played archaeologist/adventurer Indiana Jones of course, and Calista had a minor part as the Staff of Ra. Here’s a movie still: 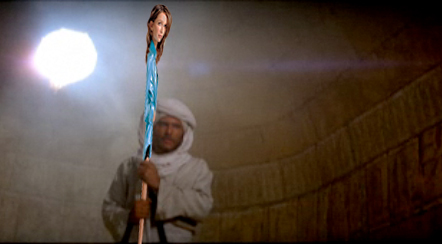 PHOTO Original cast returning for Star Wars VII, plus a list of all the new additions