****UPDATE 2/1/09 – Here’s what Bruce ACTUALLY wound up playing:
Backstreets (Rockin’ horn section on a Bruce classic)
Born To Run (What can you say? Of course!)
Working On A Dream (Short version – more dynamic than the studio version)
Glory Days (Heh heh! Lots of Bruce fun on this one. He altered the lyrics to “football player” and “hail Mary” instead of “speedball by ya.” Also featured fun dialog between Bruce and Steven towards the end, wth Bruce letting his buddy know that they had to get off the stage or they would get “penalty time.”)
Great job Bruce!!!

The Boss will be playing the halftime show during the Super Bowl this year, and though these things are almost always disappointingly cheesy and forced, I thought I might get a little caught up in Bossmania and make some song suggestions. (****Warning – during the course of this post it will probably become apparent that I watch the NFL and that I’m a big Bruce Springsteen nerd. Don’t worry, we’ll jump right back on Paris and the Real Housewives soon!) (Heh heh) 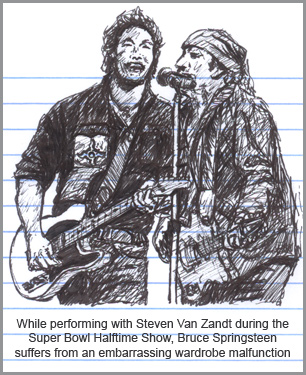 First off are some songs that have titles that fit a football theme and then I will list a couple songs for each of the eight teams still alive in the playoffs.

GENERAL FOOTBALL:
Born to Run
Touchdownbound Train
Drive All Night
Season to Believe
We Shall Overcome
If I Should Fall Behind
The Hitter

NEW YORK GIANTS:
New York City Serenade (Easy!)
Part Manning, Part Monkey (It was either this or Manning at the Top, but since I’m not a big Eli “Pete Wentz” Manning fan, then he gets my least favorite Bruce song)

PITTSBURGH STEELERS:
Mweldemoros Banks (For Mwelde Moore)
Quarterback in Your Arms (For James Harrison, who has the most sacks of any player still in the playoffs)
BONUS! Silver Polamalu (for Troy Polamalu. Added on 1/10/09)

TENNESSEE TITANS:
*Kerry Darling (For Kerry Collins)
*O Kerry Don’t You Weep For Me (From The Tennesseeger Sessions)
(*NOTE – Both of these songs could also have been performed during Bruce’s anti-Bush rallies back in 2004)

Countin’ On A Music City Miracle (Added 1/10/09 – A suggestion made in the comments section that was so good I had to include it. Thanks John R! Please – everyone else feel free to make suggestions! Even non-playoff suggestions like My City of Grudins or American Pigskin (41 Points). Anything goes!)

ARIZONA CARDINALS:
Darkness on the Edgerrin James (For Edgerrin James)
Open All Night (In Honor of the the Cardinals’ pass-happy offense and seemingly endless supply of Pro Bowl receivers)

PHILADELPHIA EAGLES:
Streets of Philadelphia (Easy!)
Donovan Nebraska (For Donovan McNabb)
(****And in honor of knocking Lil Tony Womo and the Dallas Cowboys out of playoff contention, Bruce should perform a heartfelt acoustic performance of Sayanora Cowboys)

BALTIMORE RAVENS:
Cover Me (In honor of their smothering defense)
Waitin’ on a Sunny Ray (For Ray Lewis. Maybe a Super Bowl victory will allow him to relax.)

SAN DIEGO CHARGERS:
The Rivers (For Philip Rivers)
The Ghost of Tomlinson Joad (For the Injured LaDanian Tomlinson)
(****Possibly a last minute substitution will be Vincent Jackson Cage, depending on how Vincent Jackson’s recent DUI arrest plays out and whether or not there’s jail time involved)

That’s it! Some honorable mentions for teams and players that didn’t make it include:
The Price You Peyton (For Peyton Manning)
Daniel in the Detroit Lions’ Den (0-16! I suppose they conquered a different Goliath)
It’s Hard to Be a New Orleans Saint in the City
Pink Cadillac Williams

(For those of you that aren’t Boss dweebs, here’s a list of his “real” songs in the order that I used them above: Born to Run, Downbound Train, Drive All Night, Reason to Believe, We Shall Overcome, If I Should Fall Behind, The Hitter, New York City Serenade, Part Man Part Monkey, Man at the Top, Metamoros Banks, Back In Your Arms, Silver Palomino, Sherry Darling, O Mary Don’t You Weep For Me from The Seeger Sessions, Countin’ on a Miracle, My City of Ruins, American Skin (41 Shots), Darkness on the Edge of Town, Open All Night, My Delhommetown, Lonesome Day, Streets of Philadelphia, Nebraska, Sinaloa Cowboys, Cover Me, Waitin’ on a Sunny Day, The River, The Ghost of Tom Joad, Jackson Cage, The Price You Pay, (Daniel in the ) Lion’s Den, It’s Hard to Be a Saint in the City, Pink Cadillac)

PS – Football is no place for politics, so Bruce please stay away from dedicating Badlands to Al Franken or Satan’s Jewel Crown to George W. Bush. Football is a place for hot chick admiration, so feel free to dedicate Cynthia to NFL cheerleaders and beer commercial babes everywhere!

PHOTOS Bruce Springsteen shirtless on the beach in St. Barts!