MTV UK is reporting that HBO is talking with Britney Spears, Paris Hilton and Lindsay Lohan about a sitcom starring all three that is described as a mix of Friends and Ugly Betty. A source says Ricky Gervais has been approached to handle script writing and that the three uber-celebrities would be playing characters similar to their real life counterparts: Paris is a fashion designer, Britney is an aspiring singer, and Lindsay would be sort of a “female Joey from Friends.”

(This is all straight forward – we haven’t even been sarcastic yet! I can’t believe we wasted “Ménage À Twats” on the Jonas Brothers. How were we to know?) We don’t know what the show will be called (our suggestion is below), but we think the hour long Christmas Special should be called “Ho Ho Ho.” 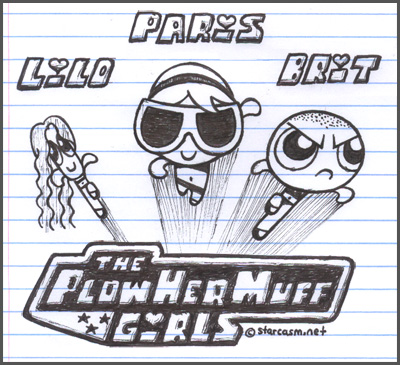 Reports: Lindsay Lohan was drunk when punched a married palm reader over Max George from The Wanted

PHOTO The web on Britney Spears on the web!